A spike in consumer printer demand during COVID-19 lockdowns has helped overall sales through European distributors grow by 2.2% year-on-year in the first 18 weeks of 2020, according to CONTEXT, the IT market intelligence company.

The latest data from CONTEXT indicates that, although not as essential to home working and studying as products like computers and headsets, printers became more popular in March and April as households began to see the value of having a device at a time of mass school and office closures.

However, although the etailer consumer and retail channels accelerated their purchasing in Q1 2020 due to concerns over supply instability, revenues fell by 10.6% year-on-year. This was due to falling ASPs and a greater focus on consumer products (cheaper entry-level and mid-range models) than in the same period last year.

According to CONTEXT, consumer printers dominated the first 18 weeks of 2020, accounting for 64% of sales and growing by 11.7%, while unit sales in the business segment fell sharply at -14.4%.

Inkjet MFPs and SFPs were the winners: European distributors sold more of these models in almost every single week than at the same time in 2019, CONTEXT said. A shortage of consumer printers also forced many buyers to purchase entry-spec business inkjet MFPs, driving up revenues.

Overall inkjet sales have risen 30% year-on-year due in part to ink-tank models that are appealing to consumers looking for more durable home essentials.

Laser printers have had a less successful year thus far, with neither the business nor the consumer segment matching 2019 performance. Overall sales during the first 18 weeks of 2020 were down by 7.2% year-on-year (and revenue by was down 17.5%), mainly due to falling business demand. However, sales of laser MFPs aimed at consumers grew by 29%, driven mainly by cheaper models of up to €150 ($167).

The story in each of the major Western European countries was slightly different, and it reflects differences in the timing and nature of measures implemented by governments to control the spread of the virus. Only Spain recorded unit sales and revenue growth, with most countries showing declining revenues even as volume sales increased.

CONTEXT concluded that although there is no sign of recession, a prolonged lockdown across Europe could leave vendors and distributors with excess inventory, especially business laser printers. 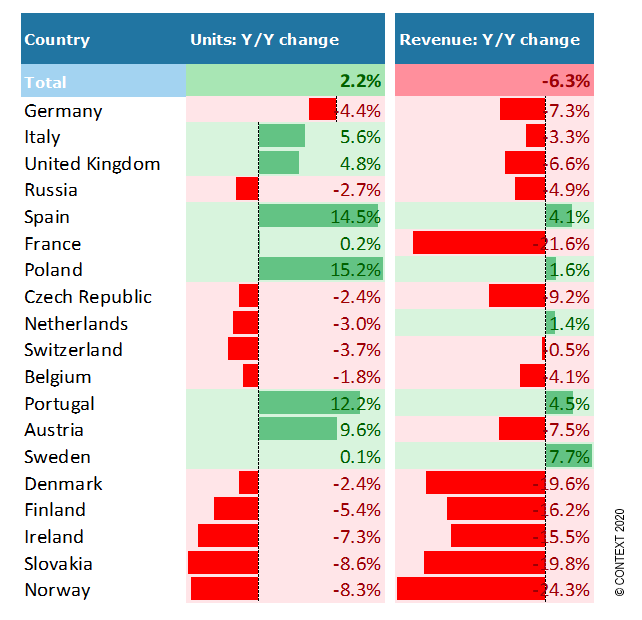