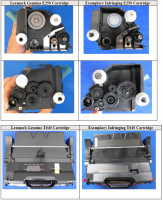 The OEM’s case against 29 companies from across the global industry refers to patents relating to a range of toner cartridges, which it argues defendants have either remanufactured or cloned with “blatant” duplication of its patents.

This case saw a GEO issued in September 2011, with Cease and Desist Orders prohibiting the original defendants from “importing, making, advertising, distributing” and transferring the cartridges and components, due to them being covered by Lexmark’s patents. Permanent Injunction Orders have also been made against the original defendants, and the new developments in the case refer to Lexmark’s ongoing investigation into existing and new defendants.

Among the defendants named in the new document are:

Referring in detail to an extensive list of toner cartridges manufactured by Lexmark, including a wide range for which it has assisted in the manufacture or design of (that are not Lexmark cartridges), the OEM notes in turn a range of patents for toner cartridges and components that cover it in the USA. These 24 patents are those that the OEM states defendants have previously “expressly agreed” to the validity and enforceability of.

The focus of the patent infringement suit appears to be the remanufacture and cloning of a range of Lexmark E, X and T toner cartridges, and Lexmark outlines its case with images of its original, “genuine” models next to the infringing models, noting that the cloned cartridges are “mere copies” of its originals that “blatantly duplicate” the components used, whilst in addition the remanufactured cartridges said to infringe the patents are “in all relevant respects, identical to Lexmark’s patented toner cartridges.

“In other words, the remanufactured versions continue to practice Lexmark’s patents just as when those cartridges were originally manufactured and sold by Lexmark”. The OEM has even produced a table presenting the respective patents and which cartridges infringe which patents, with a numbered guide relating to the specific defendants it claims have infringed each of the patents.

The OEM noted that its “investigation and discovery” of the “unauthorised remanufacture” of the cartridges still continues, adding that it may yet “identify additional defendants”. It went on to note that two defendants previously named, Tech Optics and Wal Group LLC, had broken an agreement previously made with the OEM to disclose all its accused cartridges, and the case in its entirety is set to be heard before a jury, with Lexmark demanding full compensation for legal costs and damages.