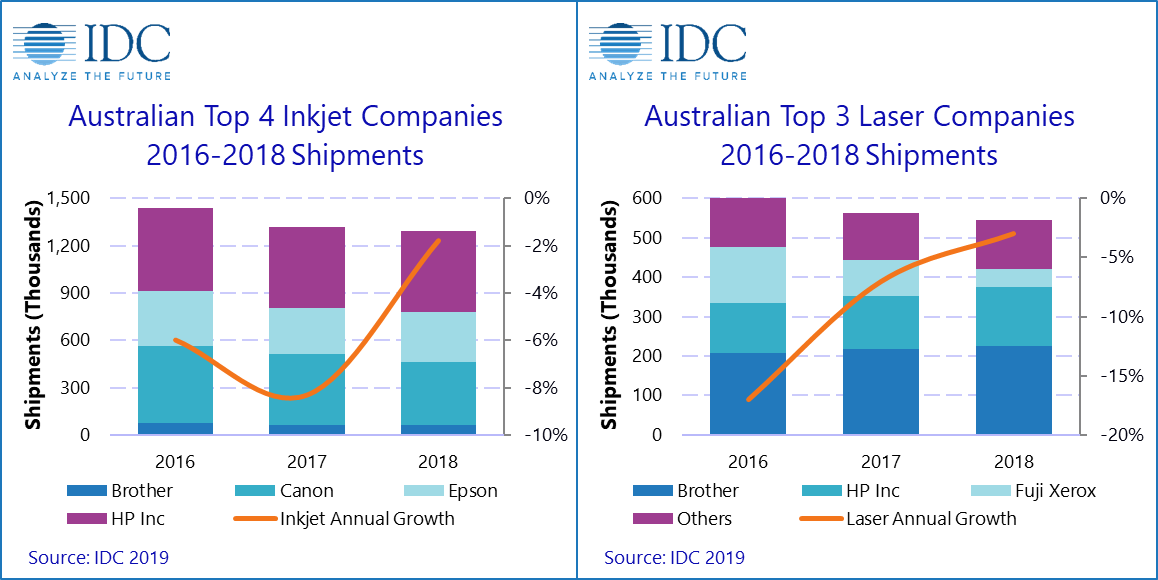 The overall Australian printer market recorded 1.84 million unit shipments in 2018, which was 2.2 percent less than that of 2017, according to the latest IDC Asia Pacific Quarterly Hardcopy Peripherals (HCP) Tracker. However, the decline has softened when compared to prior years, hinting at a level of stabilisation in the office printer market, IDC explained.

Selling volume for both inkjet and laser devices continued to drop, reportedly down 1.8 percent and 3.0 percent year-on-year respectively. However, the shipment of colour laser multi-function products offered a slightly brighter spot in the shrinking market, with an annual growth at 6.8 percent.

IDC continues, among the inkjet vendors, HP Inc had strengthened its position by increasing the occupancy rate on entry-level printers. In contrast, Canon lost a portion of market share for photo printing, with consumers shifting towards the use of self-service printing at retail stores.

In the laser market, Brother and HP Inc continued to be the leaders, while Fuji Xerox decided to exit the lower-end A4 printer market due to decreasing demand. Kyocera Document Solutions had narrowed the gap since 2017, gained share in both the A3 and A4 segments.

“Despite modest growth in certain MFP segments, the printer market size was still falling in Australia. Major vendors in this market can no longer rely on hardware sales alone, focus on solution-based approach that incorporates software and services imperative to maintain the value to the customer base. Printer vendors must be able to articulate how their solutions are solving customers business problems as they configure their work environment for the future.” Said Jimmy Li, Market Analyst at IDC.