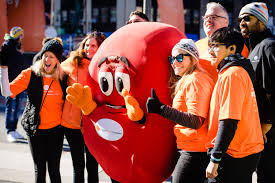 Konica Minolta announced it partnered with the National Kidney Foundation (NKF) for NYC Kidney Walk, its President and CEO Rick Taylor was announced as Co-chair for the 18th annual event.

Konica Minolta Business Solutions U.S.A., Inc. continued its support of the National Kidney Foundation and the fight against kidney disease by again participating in the annual New York City Kidney Walk. Rick Taylor, President and Chief Executive officer of Konica Minolta, served as Co-chair with dealer partner Larry Weiss, President of Atlantic, Tomorrow’s Office at the event which was held on Sunday, 10 November in Foley Square in Lower Manhattan.

Taylor and Weiss have been working together with the NKF Serving Greater New York and Connecticut to help raise $1.2 million (€1.08 million) of funds to provide a broad array of me, resources, and services for patients, those at risk, healthcare professionals and the general public.

The Kidney Walk programme is the nation’s largest fundraiser to fight kidney disease. Held in nearly 100 communities, more than 85,000 walkers join the NKF annually to help kidney patients and their families each year. More than 80 cents (€0.72) of every dollar donated directly supports NKF programmes and services.

“I am proud to serve as Co-chair for the 2019 New York City Kidney Walk,” said Rick Taylor, President and CEO of Konica Minolta. “With one in three American adults at risk for kidney disease, my goal as Co-chair is to raise awareness and continue the conversation surrounding kidney health. In this role, I am committed to making 2019 a record-breaking year, raising funds to support the NKF’s lifesaving outreach initiatives and innovative research.”

Rick Taylor is well-known for his charitable work, helping to raise $6 million (€5.43 million) for charity in the first quarter of 2019. Encouraged by Taylor’s passion for philanthropy, the Konica Minolta NYC Kidney Walk team has grown to more than 70 walkers and fundraising efforts have the team near the top of the fundraising leaderboard. “As a company, we are committed to supporting this important cause that affects so many of our employees and customers on a personal level,” said Taylor. “I’d like to thank every employee who has shared their story, joined the team and raised funds. Your enthusiasm and efforts are inspiring and will have a lasting impact on our communities.” 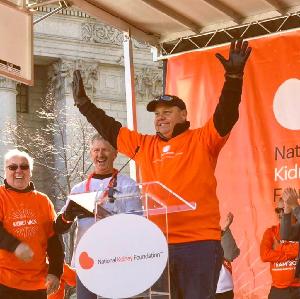 Throughout the year, Konica Minolta, a long-time partner of the NFK, attains donations through employee activities, with full proceeds going toward the foundation. Most recently, the company used its large presence at the PRINTING United trade show in Dallas, Texas to support its charity partner in its dedication to the awareness, prevention and treatment of kidney disease. A special corporate citizenship initiative at Konica Minolta’s exhibit booth included a donation of $1 (€0.90) for every visitor badge scanned at the booth. The company also activated with an in-booth display and contest to win an all-expense paid trip for two to NYC to walk with the Konica Minolta team.

Larry Weiss has been supporting the NKF in various ways for 25 years, and also serves on its board of directors. “At Atlantic, giving back to the communities we serve is part of our corporate DNA,” said Larry Weiss, President of Atlantic, Tomorrow’s Office. “We endeavour to make positive change and have established many community and philanthropic partnerships over the years supporting not-for-profit organisations that make a difference. The NKF is very important to us, and one we are personally involved with to help raise funds and promote the good work of the staff and volunteers. It is imperative that we lead our communities by including kidney health in the larger public health conversation.”

“Rick Taylor and Larry Weiss exemplify what it means to be philanthropic leaders and kidney health advocates in our community, and we are thrilled to have them serve as our 2019 New York City Kidney Walk Co-chairs,” said Meg Gilmartin, Executive Director of NKF Serving Greater New York and Connecticut.

NKF estimates that as many as 600,000 citizens of New York City are living with undiagnosed chronic kidney disease, which is the gradual loss of kidney function over time that can result in kidney failure. Once a patient reaches kidney failure, dialysis or a kidney transplant are required to maintain life. According to the United Network for Organ Sharing (UNOS), in New York State alone, 9,502 candidates are currently on the waitlist for organ transplants and of that 7,870 people are awaiting a kidney. NKF is the largest, most comprehensive and longstanding organisation dedicated to the awareness, prevention, and treatment of kidney disease.