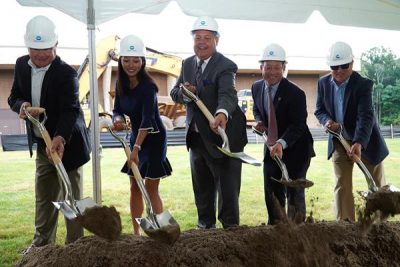 Konica Minolta Business Solutions U.S.A., Inc has hosted government officials (federal, state and local), representatives from industry trade associations, chamber -of commerce members and the media in a ground breaking ceremony to mark the beginning of the expansion of their Ramsey campus.

The expansion not only marks the company’s continued growth in the imaging sector to produce high end technologies that meet customers’ evolving business needs, but also Konica Minolta’s commitment to the New Jersey economy, in bringing new jobs to the area.

The project will encompass new building construction, as well as the conversion and repurposing of existing facilities on the campus. When completed, it is expected that the new jobs created will boost the local economy, from employing area residents to shops and businesses that will benefit from added sources of revenue.

Rick Taylor, President and CEO of Konica Minolta, accompanied by several senior executives, presided over the ceremony – the first large-scale addition to the campus infrastructure in several years. As noted in Rick’s remarks, “Konica Minolta has reached a special milestone, fuelled by our continued growth in the imaging sector. We believe our investment in the Ramsey campus will not only bring new jobs to New Jersey, but it will serve a key role in supporting our business expansion to help add value to our customers.”

Specifically, the expansion is expected to make way for:

Deirdre Dillon, Ramsey Borough Mayor, stated, “Konica Minolta has been a great neighbourhood fixture for many years, providing jobs to many of our residents and those from nearby towns.” Dillon added “The company has also been very generous in supporting special community projects by contributing employee volunteers, which has benefited many businesses and residents in the local community.”

In addition to an overview of the project provided by Rick, the ground breaking featured a traditional first-dig of soil, as conducted by company executives and invited guests, all equipped with special ceremonial shovels and Konica Minolta hardhats.

Construction and related activities will be conducted in stages, with an anticipated final completion date of summer 2019.