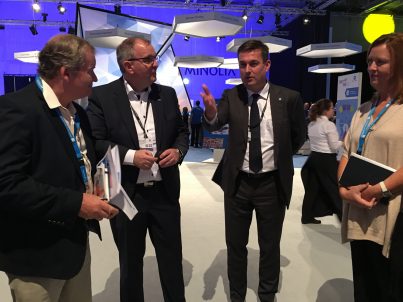 The event took place in Berlin on 20 October 2017, with the theme of Together We, and was attended by over 1000 people from 53 countries.

Konica Minolta Europe recently hosted its Leadership Campus dealer meeting in Berlin on Friday 20 October 2017. The event was covered by Industry Analysts and consisted of a “keynote session, seminars and an impressive product fair”, before concluding with “a big party”.

Although the event was ostensibly a conference, it was given the name ‘campus’ in order to foster an atmosphere of “learning and collaboration”.

The company’s president and CEO, Shoei Yamana, came all the way from Japan to attend and he delivered the opening speech, “discussing how office and production printing remain at the core of Konica Minolta” and that they continue to be “a growth opportunity”.

He also discussed the OEM’s Edge strategy and the WorkPlace Hub products soon to be launched which “will tie all connected devices together.” The Hub is expected to be available from early 2018.

Konica Minolta Europe’s President, Ikuo ‘Indy’ Nakagawa, followed Yamana and “continued the WorkPlace Hub discussion, explaining what a milestone it is for Konica Minolta” and that he “sees IT services as a big opportunity for European dealers and resellers.” He went on to reiterate that digital printing “is still a huge potential” for the OEM and concluded, “we have been transitioning our business and we believe you are part of this transformation.”

Mr Yamana then activated a light show for the spectators, concluding with the dropping of a vast stage curtain which revealed “an enormous product fair”, showcasing “a tremendous amount of technology”.

This included Konica Minolta’s voice control technology, Eva, the Mobotrix facial recognition technology, Alice, the OEM’s virtual assistant, and an air filter system that “uses the copier to remove particles from the air, thus improving the air quality in the room where the device sits.”

The campus concluded with a private event consisting of “a great dinner in a huge hall decorated like Berlin from the 1920s” and also featured a live band and dancers.