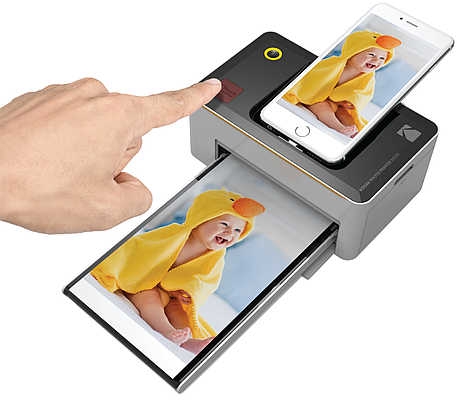 On June 14, Kodak announced the release of their new Photo Printer Dock, a gadget which allows users to print images quickly and effectively directly from their smartphone with the touch of a button.

As well as being compatible with both iOS and Android phones, the $139 (€124) printer dock can also be connected to USB memory sticks, tablets and digital cameras and can print both .png and .jpg images. Users simply attach their Android phone to the micro USB connector, sync their iOS phone using the lightning charger, or connect their digital cameras using the printer’s PictBridge® technology. It is also possible to connect to the dock remotely using the in-built Wi-Fi network. The printer works simultaneously as a charger, charging up to two devices while they are attached to the top of the dock.

Once connected, using the Kodak Photo Printer app, users can edit their chosen images, add special effects, and print crisp, clear 4 x 6 inch colour copies with the press of a button. The images are created using photo packs, which are available in packs of 40, 80 and 120 prints, and use dye diffusion transfer inks and integrated paper. Once printed, the images should be both water- and fingerprint-resistant, according to the manufacturer.

The app also boasts other creative features, including stickers, filters, card templates and a collage maker function, and allows users to capture images from both videos and social media.

This new printer dock, which is available via Amazon or through D&H Photo, is just 6.5. inches in width and 4 inches deep, weighing a mere 26.8 ounces. It is sold with an owner’s manual, a 10-photo cartridge, a paper pack, and a power adaptor. To enable it to work with multiple devices, the printer features an adaptor for iOS phones, and the 5-pin Android micro USB connector.