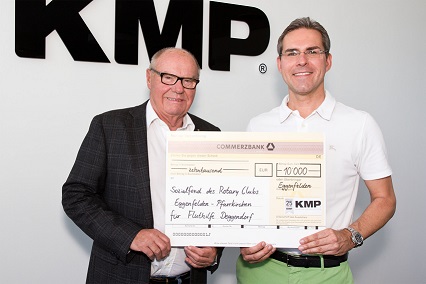 German cartridge manufacturer announces it has raised €10,000 for those affected by Lower Bavarian floods.

KMP PrintTechnik AG has announced that it has helped to raise €10,000 ($13,000) for people whose lives were affected by the flooding in Lower Bavaria, which occurred in May and June of this year due to the River Danube’s rising water levels.

KMP’s headquarters are situated just 50 kilometres away from the area where it says “citizens have literally lost everything to the recent flood”, and so on the occasion of its 25th anniversary celebrations, the company requested that guests donate to the social fund of the local rotary club, Eggenfelden-Pfarrkirchen, instead of buying gifts for the company, in order to help with the aftermath of the flooding.

Initially, KMP was able to raise €8,695 ($11,433), but this has been increased to €10,000 by the company’s management, with the total amount forwarded to the Lower Bavarian flood relief fund ‘Fluthilfe Deggendorf’.