An engineering team from the University of Missouri have 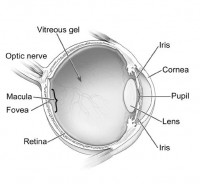 As a film of oil keeps a thin layer of tears from evaporating from the eye, the devised nozzle uses a droplet of silicone oil to cover the nozzle opening when not in use. While eyelids keep the film of oil spread over the eye, a similar solution akin to mechanical shutters would not be applicable at the scale of the inkjet nozzle and thus the droplet of oil is moved in and out of place by an electric field.

Noting that clogged printer nozzles reduce print quality and subsequently waste time and money, associate professor Jae Wan Kwon commented: “The nozzle cover we invented was inspired by the human eye. The eye and an inkjet nozzle have a common problem: they must not be allowed to dry while, simultaneously, they must open. We used biomimicry, the imitation of nature, to solve human problems.”

Kwon remarked on the practise of most inkjet printers to clear clogged nozzles, namely a burst of fresh ink to break down a crust of dried ink, as costly and wasteful.

“Other printing devices use similar mechanisms to inkjet printers. Adapting the clog-free nozzle to these machines could save businesses and researchers thousands of dollars in wasted materials.

“For example, biological tissue printer, which may someday be capable of fabricating replacement organs, squirt living cells to form biological structures. These cells are so expensive that researchers often find it cheaper to replace the nozzles rather than waste the cells. Clog-free nozzles would eliminate the costly replacements.”