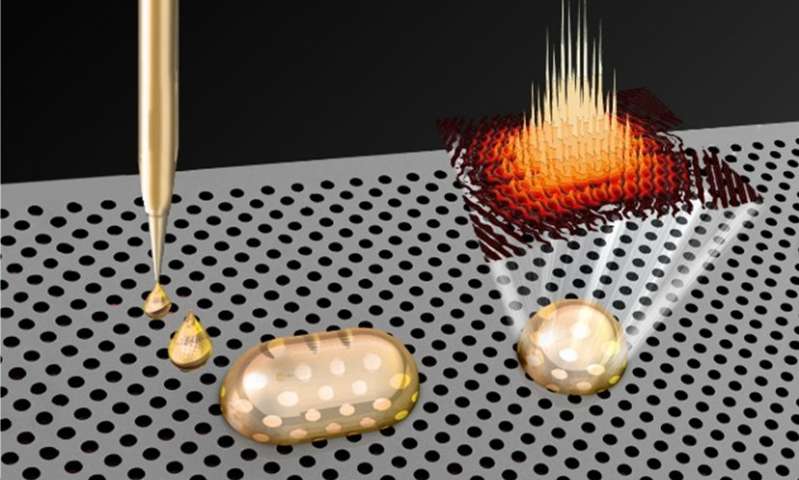 Scientists have been using an inkjet printing technique to trap and harness light, with the help of a microscopic pen.

Phys.Org reveals that researchers at both the University of Cambridge and the Hitachi Cambridge Laboratory have developed a microscopic “pen” that can “write structures small enough to trap and harness light using a commercially available printing technique”. This new, jointly developed technology could have a number of different applications, including “sensing, biotechnology, lasers and studying the interaction between light and matter.” It is the first time that nanophotonics and high-resolution inkjet printing have been successfully combined and was achievable thanks to developments in inkjet printing, which have taken place over the last decade and mean that the technique can be used “to print very small devices, using a range of printable materials, including living cells, as ‘ink’”.

“Most inkjet printers push the ink through the nozzle by heating or applying pressure, producing ink droplets about the size of the diameter of a human hair,” said the paper’s co-first author Dr Vincenzo Pecunia, a former PhD student and postdoctoral researcher, and now visiting researcher, at the University’s Cavendish Laboratory.

For his research Pecunia had acquired a “printer capable of ultra-high resolution printing” which works by applying “a voltage to the ink, providing enough force to push it through a much smaller nozzle, producing ultra-small ink droplets”, many times smaller than any that conventional printers can create.

A “chance meeting” between Pecunia and the co-first author of the research, Hitachi Cambridge Laboratory’s Dr Frederic Brossard, led to their discovery that this printer “could print structures small enough to be used in nanophotonics”, the field Brossard specialises in.

“Previous efforts to combine these two areas had bumped into the limitations of conventional inkjet printing technology, which cannot directly deposit anything small enough to be comparable to the wavelength of light,” said Pecunia. “But through electrodynamic inkjet printing we’ve been able to move beyond these limitations.”

“Previous efforts to combine these two areas had bumped into the limitations of conventional inkjet printing technology, which cannot directly deposit anything small enough to be comparable to the wavelength of light,” said Pecunia. “But through electrodynamic inkjet printing we’ve been able to move beyond these limitations.”

The researchers managed to deposit tiny ink droplets onto photonic crystals, droplets so small they could “be ‘drawn’ on the crystals” and “change the properties of the crystals so that light could be trapped.” As a result, they could create a variety of different patterns “at high speed and over a large area”, which can “be made of all sorts of printable materials, and the method is scalable, low-cost”.

“This fabrication technique opens the door for diverse opportunities in fundamental and applied sciences,” said Brossard. “A potential direction is the creation of a high density of highly sensitive sensors to detect minute amounts of biomolecules such as viruses or cancer cells. This could also be a very useful tool to study some fundamental phenomena requiring very strong interaction between light and matter in new materials and create lasers on demand. Finally, this technology could also enable the creation of highly compact optical circuits which would guide the light and which could be modified by inkjet printing using the photonic crystal template.”