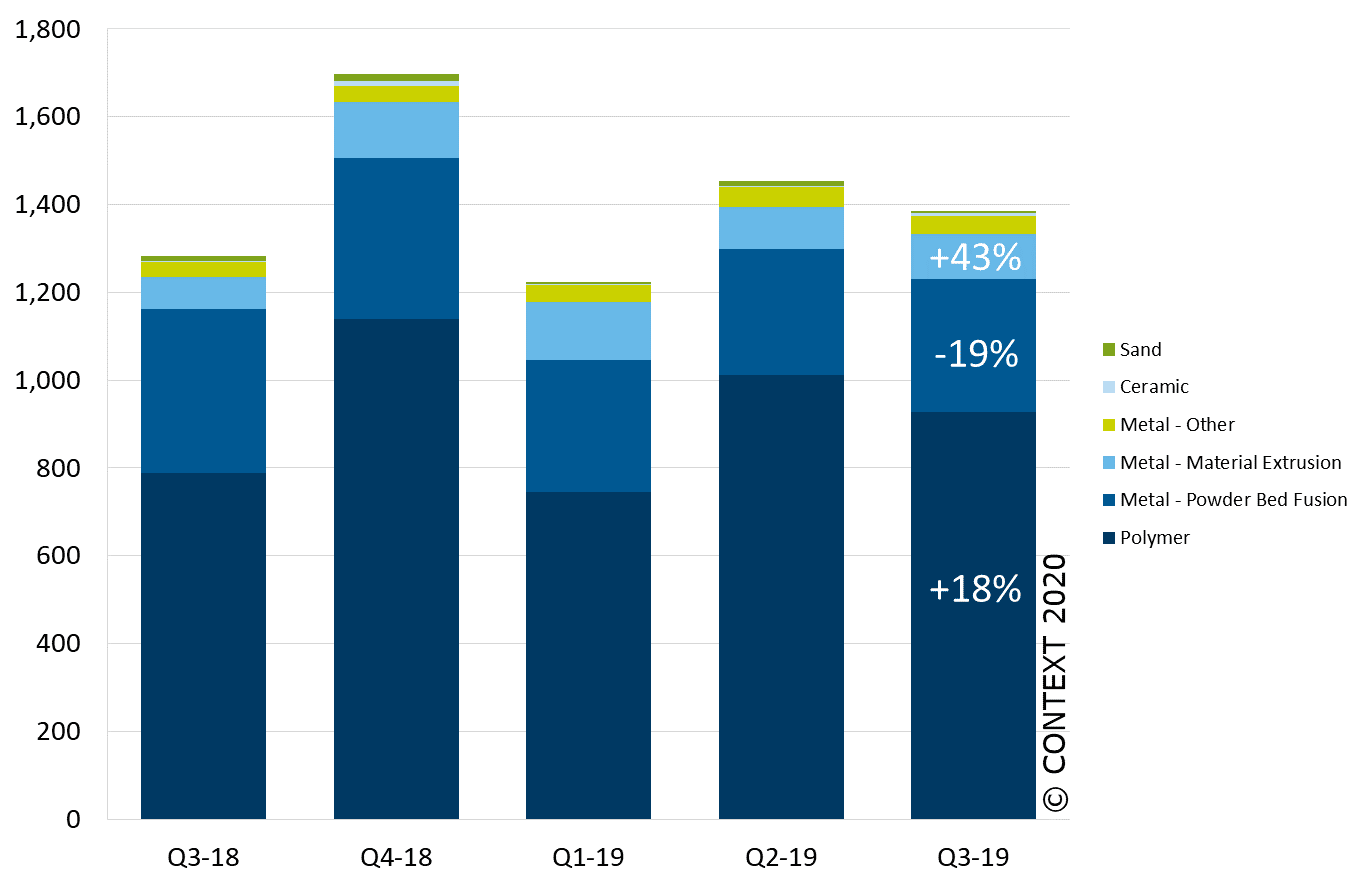 This key sector – which accounted for almost 70% of all 3D printer revenues for the period – saw even more impressive shipment growth of 12% on a trailing twelve month (TTM) basis. CONTEXT said that the increase came as a surprise given the headwinds many vendors reported in the second half of the year. Reduced demand from the struggling automotive sector, sluggish European economies and a generally weak global industrial manufacturing market all impacted the bottom line of many companies in the third quarter.

In the Industrial polymer 3D printer market, HP (now #2 in global shipments) saw excellent growth, shipping 347% more printers in Q3 2019 than in Q3 2018 as it continued to roll out its more affordable colour-capable units as well as began to ship the newest iteration of its most advanced, highest-end, production-focused models in volume. The Chinese domestic market also grew, mostly thanks to leading Chinese vendor UnionTech.

While Industrial metal printers made up just 32% of unit shipments in the class over this period, they accounted for just over 51% of revenues, according to CONTEXT. Metal 3D printing is one of the fastest growing additive manufacturing segments and has seen shipments grow at an average rate of 30% over the last two years.

However, the dominant technology – powder bed fusion – began to struggle in the second half of 2019. In the third quarter, 19% fewer metal powder bed fusion 3D printers shipped than in the same quarter the previous year, with market leaders EOS and GE Additive both seeing weaker shipments not only for the quarter but for the trailing twelve months as well. Even so, aggregated shipments of metal 3D printers grew by 11% as a different technology began to take centre stage, driven by Desktop Metal and Markforged. The new crop of material extrusion metal 3D Printers – which saw year-on-year shipment increases of 43% – addresses new markets for prototyping and entry-level metal printing.

Since many of these markets are outside the aerospace, automotive and medical sectors that currently use powder bed fusion machines, the growth in shipments of extrusion models was not related to the decline in those of the other type of machine.

There was good growth in North America and China during Q3 2019, where year-on-year increases in Industrial 3D printer shipments were 22% and 36% respectively, while the global #2 market, Western Europe, saw shipments fall by 28%.

Of the three other major price classes for finished-good printers – Personal, Professional and Design – shipments of printers in the Professional class were most notable. Printer shipments in the third quarter in the Design segment was largely flat and shipments of Personal class printers continued to struggle, losing ground to kit-based solutions like those from China’s Creality3D. The Professional segment continued to shine however, growing by an excellent 21% on the previous year and a solid 17% on a TTM basis.

Many vendors who formerly focused on the yet-to-explode consumer market have shifted their product lines to move into this price class. Especially noteworthy in the Professional class in the quarter was the performance of Formlabs which finally began shipping new models in volume against strong pent-up demand and surged to the top of the market in this class as the availability of their new products was bolstered by glowing reviews.

Many forecasts for Q4 2019 and on into 2020 turned a bit cautious toward the year end due, in part, to weaker demand from key geographies, to softening orders from key vertical markets, and to uncertainties associated with global trade. The period was also marked by significant managerial changes atop leading companies, also contributing to near-term uncertainty.