Indian sub-distributor pushes on with case against HP 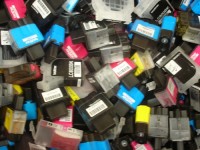 Priyanka Computer Services has sent a legal notice to the OEM’s Indian subsidiary over the issue of expired inkjet cartridges.

The company originally targeted HP earlier this year over the expired inkjet cartridges worth Rs 8 lakh ($16,216/€12,197), because HP had not replaced nor removed the stock after multiple requests by Priyanka.

The company is claiming Rs 50 lakh ($94,163/€72,328) in damages for defamation and divergence of business, with the previous developments noting that HP’s excuse was ‘policy reasons’. The OEM emailed news outlet CRN stating that inkjet cartridges are “not covered against expiry as an industrial policy”, but Priyanka’s CEO Kishore Makhija has reacted by serving the legal notice he threatened in February.

Makhija stated: “We will file a court case against HP India for unethical business practice under Competition Act if we do not get a favourable reply within the given time-frame of 30 days from the receipt of the notice.”

Makhija added that he had approached the Chattisgarh Computer and Media Dealer Association (CMDA) to raise his concerns over the OEM’s policy, and said that the CMDA “has agreed to iron out the issues over the unfair trade practice, and redress other concerns of partners”.

Devender Marvah, President of the CMDA, added that the association would threaten a boycott of HP in the region: “We have conveyed to HP IPG that our members will not do business with the company if the issue is not resolved at the earliest.

“HP has sought a week’s time. We will hold the association meet on May 11, 2012 and decide the future course of action.”

Priyanka commented that the notice was served to HP on April 14, with the court case to be filed one week after the 30 days deadline.