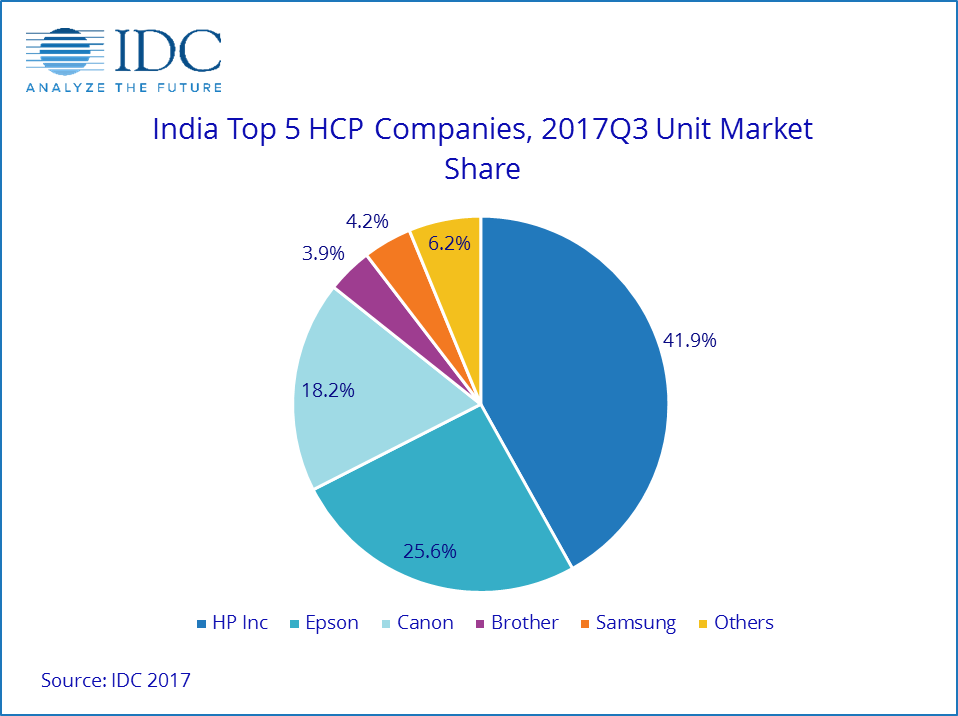 A new report by IDC reveals that the HCP market in India has “had a record high quarter” with 1.1 million unit shipments.

The market experienced a 24.2 percent year-on-year (YoY) growth and 57.2 percent quarter-on-quarter growth according to IDC Asia Pacific Quarterly Hardcopy Peripherals Tracker, 2017Q3. Shipments of inkjet units “crossed 500,000 units for the first time ever”, with overall shipments “touching roughly 579,371 units”; resulting in a “stellar growth” of 25.5 YoY. The laser printer market also did well, experiencing “its best quarter since 2014” with total shipments of 486,947 units, a YoY growth of 24.8 percent.

“Q3 2017 was anticipated to be better versus Q2 2017 because of the Diwali festive season. Despite a higher tax slab of 28% on multi-function printers, accounting governance created by the Government of India which requires businesses to maintain copies of electronic invoices to claim GST refund, largely contributed to the market growth. Several rounds of online festivals and sales by eTailers in the month of August and September also played a part in the robust growth in the consumer demand in printer category,” says Abhishek Mukherjee, Senior Market Analyst, IPDS, IDC India.

HP Inc retained its place as overall leader of the market in HCP “with a share of 41.9 percent” and a 19.9 percent YoY growth, as well as 39.8 percent QoQ growth. However, HP gave up its “top position” in the inkjet market to Epson, thanks to Epson’s “strong ink tank portfolio”. HP does remain the market leader in laser HCP, according to IDC, with a 54.7 percent market share.

Epson’s inkjet unit shares stood at 43.6 percent, with its unit shipments totalling 252,784. Though it had experienced a “slightly weaker” second quarter, Epson “rebounded” as expected with a whopping 126.6 percent QoQ growth in Q3 2017 in the inkjet market, with Epson capitalising on “the demand in the SME and retail space”.

Canon also had a “strong quarter” in the inkjet market, achieving a QoQ growth of 62.4 percent as a result of a “strong push of ink tank models in the retail with extra bottles of black ink.” The OEM’s ink tank devices “registered a YoY growth of 35.9 percent.” Canon also maintained its leading position in the copier market.

“Market is expected to stabilise in 2017Q4, after a strong Q32017 with demand surge due to GST. The drop in GST slab for MFPs and cartridges from 28 percent to 18 percent effective 15 November, may not have impact on overall volumes but can result in end users preferring multi-function printers over single function printers. On the commercial side as well, good demand is expected from SMBs, large corporate and enterprises, however this will be offset by declining government business due to changes in the government procurement system, such that there’s a shift from direct government purchases to third party contractors,” says Nishant Bansal, Research Manager, IPDS, IDC India.