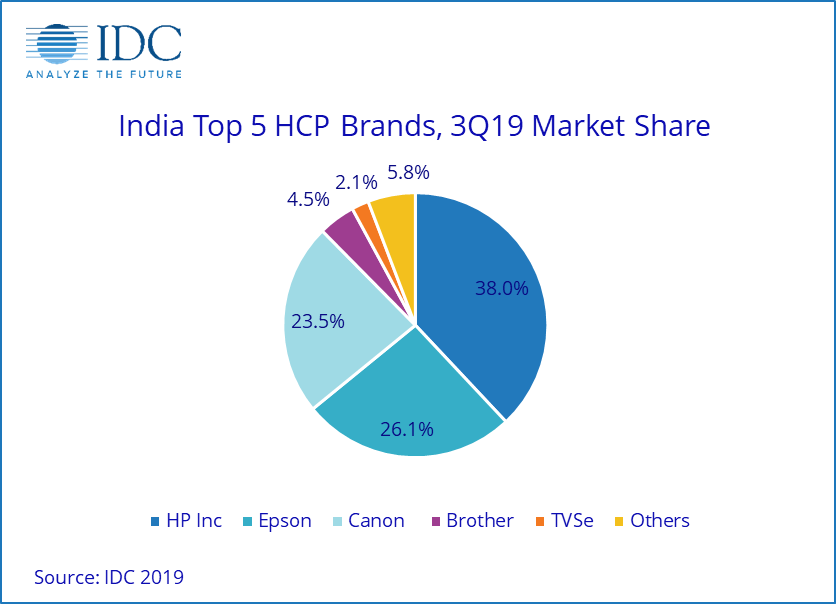 After two years of consistent YoY growth, the Inkjet segment declined by 3.8 percent due to sluggish consumer demand, despite 3Q19 being the quarter in which online channel partners stock up high volumes for the festive season online sales. Barring 2Q17, which was largely impacted by the then upcoming GST launch, the ink tank segment saw the lowest YoY growth of 0.3 percent. The laser printer segment occupied the lowest market share till date of 37.8 percent, owing to the migration of users to the ink tank segment and weak demand from SMBs and MSEs due to credit issues they continue to face with banks. Overall, the laser segment witnessed a YoY decline of 13.5 percent.

“While the YoY growth seems challenging, the situation improved from a QoQ perspective. The inkjet market grew QoQ by 35.3 percent in preparation for the upcoming festive season. There was an increase in demand from the Government and the corporate sector. Interestingly, the single-function printers grew significantly YoY while its multi-function counterpart declined, a trend not observed in the last 19 quarters. This was a conscious move from vendors in order to flush out the inventory of single-function printers through partner schemes and flash online sales,” said Bani Johri, Market Analyst, IPDS, IDC India.

HP Inc. (excluding Samsung) maintained its leadership in HCP with a market share of 38.0 percent, while its shipment declined by 9.9 percent YoY. The decline was primarily led by the inkjet segment, which declined by 11.0 percent YoY as a result of sluggish demand from the consumer segment and the intense competition its ink tank portfolio faced from other players, IDC’s tracker shows. HP retained its 2nd position in the inkjet segment. On the laser printer front, HP continued to maintain its number 1 position with a 60 percent market share and grew by 3.9 percent QoQ owing to attractive partner schemes.

Epson maintained its 2nd position in the overall HCP market and declined marginally by 1.3 percent YoY. Epson’s single-function printer’s shipment grew significantly at the back of attractive channel schemes. It continued to hold its leadership position in the inkjet segment with a unit market share of 40.8 percent.

Canon recorded YoY decline of 5.0 percent while maintaining its 3rd position in the HCP market and capturing 23.5 percent unit market share. In the inkjet segment, Canon grew YoY by 0.8 percent as a result of channel stocking even though the market sentiments were subdued. With its wide product portfolio and a strong foothold in the corporate segment, Canon continues to lead the copier market with a 28.9 percent unit market share and by securing multiple Government orders it grew by 4.0 percent QoQ, IDC said.

“We should expect challenging market conditions in 4Q19 and possibly H1’2020 as the negative economic sentiment will likely impact both consumer and commercial demand. High level of channel inventory and weak consumer sentiment are going to be the main factors which will have an impact on shipments in 2019Q4. However, the corporate market demand may see partial recovery owing to recent corporate tax cuts announced by the government,” said Nishant Bansal, Senior Research Manager, IPDS, IDC India.