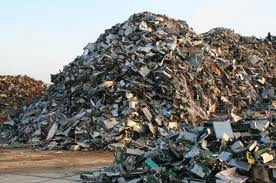 Impact of e-waste in Pakistan highlighted An article on The Korea Herald focuses on the implications e-waste is having in Pakistan, where increasing amounts of used electronics are being dumped from developed countries, exposing those working with e-waste to health and environmental hazards.

Thousands of tons of e-waste is sent to Pakistan each year from countries such as the US and the UK, with even more expected to arrive due to China and India recently strengthening laws regarding the importation of e-waste from other countries.

According to a report, “around 13 percent” of the 40 million tons of e-waste generated worldwide each year is sent to countries such as Pakistan, Bangladesh and Sri Lanka for recycling, with approximately nine million tons of this produced in the European Union.

Health risks to those working with e-waste in developing countries can reportedly include “serious neurological damage”, particularly from materials such as lead, mercury, cadmium and other heavy metals; with the most likely victims being child scavengers looking for parts to sell from e-waste sites. Persistent organic pollutants (POPs) and flame retardants also cause health risks if improperly managed.

According to Asif Shuja Khan, Director General of the Pakistan Environmental Protection Agency, informal e-waste activities can also threaten the environment and human health through the contamination of agricultural lands and livestock, noting that the risks could be lowered if proper measures were in place such as “proper ventilation and light […] at the recycling and dumping sites”.

He added that workers at such sites should wear safety equipment and that “smoking, eating and drinking should be prohibited in the work areas and workers should also be advised to wash their hands with proper detergents before meals”.

Khan also commented on the fact that a number of foreign companies had expressed interest in working in the recycling industry by reusing e-waste in the country “if the business is given legal cover through proper legislation”, noting that Pakistan could earn millions as well as creating thousands of jobs and minimising health and environmental risks. “We will take up the issue with the relevant authorities both in the centre and provinces to legislate on import, handling and management of the e-waste,” said Khan.

A lack of knowledge of the health and environmental risks has been blamed for Pakistan’s lack of rules and regulations when it comes to dealing with e-waste, with Muhammed Ashraf, the Commerce Ministry’s Deputy Secretary, commenting: “Under the Basel Convention, the ministry is so far only looking into environmental and health risks of plastic waste being imported from different countries.” He reportedly added that a “formal strategy” for e-waste could be implemented if health and environmental hazards linked to e-waste were brought to the ministry’s attention.