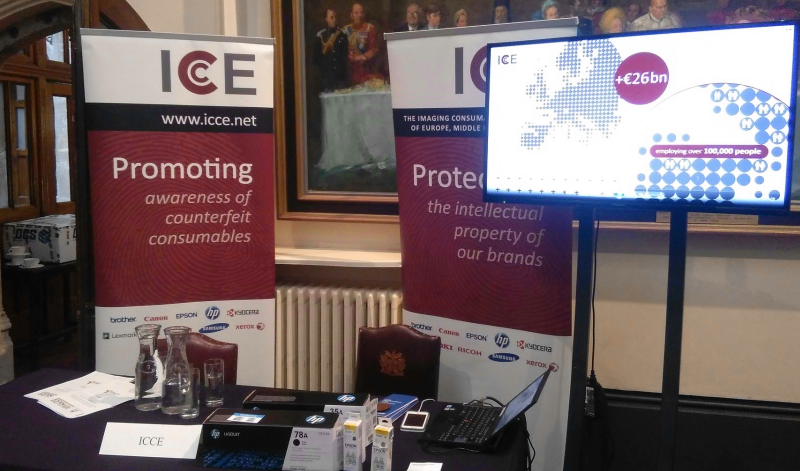 The Imaging Consumables Coalition Europe (ICCE) group of OEMs has produced a promotional video discussing its fight against counterfeit cartridges in the European market.

The video, which you can view below, features a mixture of onscreen animation, a voiceover and a couple of interviews, and starts with OEM member logos, the voiceover stating that  “as a legitimate reseller, it’s really important that you remain vigilant and make sure that you don’t sell counterfeit imaging supplies. Selling fake goods is a serious criminal offence and can result in prosecution.

“The imaging supply industry is a huge contributor to the European and global economy. It is an industry threatened by infiltration of fake toners, cartridges and ribbon entering the market, costing the global economy $3 billion (€2.7 billion) annually. Fake imaging products are not only likely to be substandard products, but they can damage printers and potentially expose consumers and businesses to dangerous chemicals”.

It advises users to “check the product and packaging” and for “poor print quality”, “spelling mistakes” and “incorrect colouring”, while the European industry is worth €26 billion ($24 billion) and employs over 100,000 people. The video then shows printer error messages, poor quality cartridges and prints and locations where counterfeiting took place.

The voiceover adds “fake imaging products are often produced in the most appalling working environments and may even fund organized crime such as terrorism. ICCE and its members are fighting back”. This is followed by images of articles about seizures and videos of raids, before the first of two interviews with Michael Ellis, Head of Interpol Trafficiking in Illicit Goods and Counterfeiting Programme.

“Where the counterfeit infiltrates the supply chain is through the informal channel, not through traditional trade channels (internet aside) – for example, in areas of brokerage, for example in the areas of smaller chains of shops where if the buyer choose to go outside what I call ‘the circle of trust’, they potentially run the risk of unwittingly – they will say – buying counterfeit products.”

The voiceover continues that “if you’re in any doubt, check directly with the manufacturer, or contact ICCE to report your suspicions. We’re here to help”, while the second interview is with Handley Brustad, Chartered Trading Standards Institute: “All businesses, whether they’re just a reseller or whether they’re a wholesaler, importer even – they need to be making sure that they’ve got good checks on all their items.

“If they’ve got any doubt, they should be getting in contact with either the brand or Trading Standards. We’re there to help businesses as much as we are consumers.” The voiceover then states “if it sounds too good to be true it usually is. Always buy from authorised channels to ensure the integrity of the goods you sell. Be especially vigilant if you’re buying from anyone who is not your standard supplier, or if you’re offered cheaper alternatives produced in other parts of the world.

“Manufacturers of imaging products are working together to combat counterfeiting. A number of our members have developed authentication devices and systems that enable you to check if a product may be counterfeit”. The video continues with images of cartridges and OEM boxes, then images of OEM labels or technology for combatting counterfeiting.

The voiceover adds that “through coordinated intelligence, ICCE has been instrumental in helping customs seize thousands of counterfeit products, worth millions of euros, which have resulted in many prosecutions. If you have any suspicions, please contact ICCE. We’ll liaise with the appropriate manufacturer and our intelligence network to help validate your claim, and if appropriate, help begin legal proceedings against the source of the fake imaging products”.

It concludes by showing images of people being arrested and of raids, with ICCE “bringing justice through prosecutions”, “working together to protect YOUR business” and “fighting counterfeit imaging supplies”.