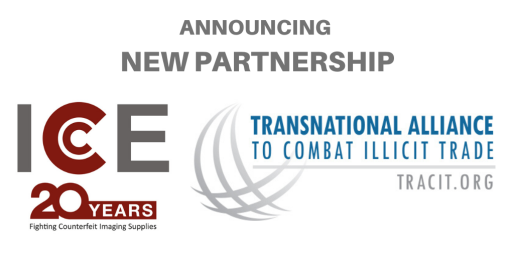 Just like human rights or environmental stewardship, illicit trade is a transnational challenge and the TRACIT network of Alliance Partners strengthens the voice of business to more effectively reach governments across borders. Understanding the interconnected nature of illicit trade is an important part of fighting counterfeiting.

ICCE explained that the same criminal groups are often exploiting the same trade routes, the same means of transport and the same concealment methods behind multiple forms of illicit trade. In joining forces with TRACIT, ICCE is taking a more comprehensive approach to the fight against counterfeiting.

“The strength of our efforts are derived from the strengths of our Alliance Partners,” said TRACIT Director-General Jeffrey Hardy. “We draw upon their expertise and connections with government officials to make a greater impact. We are delighted to partner with ICCE in our fight against illicit trade.”

ICCE added that counterfeiting accounts for the largest economic value of all forms of illicit trade, and fake and counterfeit imaging products are estimated to be worth $3.5 billion (€3.2 billion). According to the Coalition, this illicit activity robs the legitimate economy of jobs and growth, and exposes consumers to unsafe, inferior and ineffective products. But beyond the economic losses, counterfeiters cut corners in their operations, do not abide by legal manufacturing processes and use inferior raw materials. The ICCE explained that this can lead to counterfeit cartridges that emit toxic chemicals or fail indoor quality tests that expose consumers to health and safety risks. The sub-standard quality and dubious composition of these fakes also introduce environmental risks and costs associated with their destruction and disposal.

ICCE stated that the situation is particularly acute in countries where technical capacity, appropriate storage and waste facilities, and regulatory control are limited. In the bigger picture, counterfeits like fake imaging products undermine attainment of the UN SDGs in significant ways, by crowding out legitimate economic activity, depriving governments of revenues for investment in vital public services, dislocating millions of legitimate jobs and causing irreversible damage to ecosystems and human lives.

“Collaboration with TRACIT will strengthen our fight against counterfeiting which accounts for the majority of illicit trade by value “, an ICCE spokesperson said, “and we welcome the opportunity to work closely with Alliance members in future to enhance government enforcement and supply chain controls.”

TRACIT is a private sector initiative that tackles illicit trade across multiple sectors – addressing shared vulnerabilities in the supply chain and shedding light on governance gaps that are commonly exploited by criminal groups. By taking a collective approach to illicit trade, TRACIT and its partners are more effectively strengthening government regulations and integrating supply chain controls across industry sectors most impacted by illicit trade.

ICCE members invest heavily to ensure that their consumers have access to products that meet the highest quality standards with minimum impact on the environment. This starts with aggressive efforts to keep printer cartridges and other fake imaging products out of markets, offline and online. These companies are also committed to ensure that their products are not associated with any form of human rights abuses including forced or child labor. For example, ICCE members are committed to using responsibly sourced raw materials, including conflict-free minerals, and they work closely with their suppliers across the industry to improve global supply chain practices.

ICCE said it is partnering with TRACIT because the imaging products sector is one of the business sectors most vulnerable to illicit trade. Together the partners aim to develop strategies that promote holistic and interconnected approaches to eradicate illicit trade and the threats it poses to legitimate business sectors, fair trade, the international economy and global security.