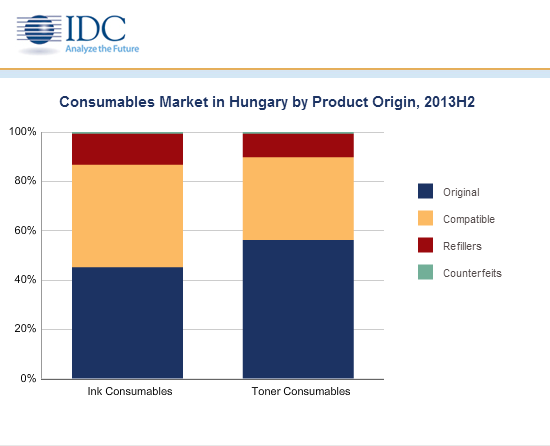 Research conducted by IDC found that during the second half of 2013 (H2 2013), the Hungarian market for consumables stabilised following an extended period of contraction, with the market remaining “extremely price-sensitive” as it sees “strong competition” from compatible products and refilling services, which have put downward pricing pressure on OEMs.

This pricing pressure was most apparent in the inkjet consumables space, where average sales price of products fell by 17.1 percent in H2 2013. Meanwhile, the shift from inkjet to laser devices was reflected in both new shipments and the local installed base, as toner sales continued to gain market volume share at the expense of ink consumables, which saw a further decline in market share to 55.5 percent compared to 57.3 percent a year earlier.

IDC found that “cheap new-build compatible” products, in particular clones, were rapidly gaining market share, threatening both OEMs and local remanufacturers. Laszlo Toth, Research Analyst at IDC Hungary, commented: “The extremely low price tags clones carry, often as low as one-tenth of an OEM consumable recommended retail price (RRP), seem to outweigh the possible risks for a growing number of customers. This explains why they could already represent some one-third of compatible shipments to Hungary.”

The Recycler reported in February that the Hungarian laser printer market had seen double-digit growth in the final quarter of 2013, both in terms of volume and value of shipments, despite other areas seeing declines.