HP issues the most firmware updates so far 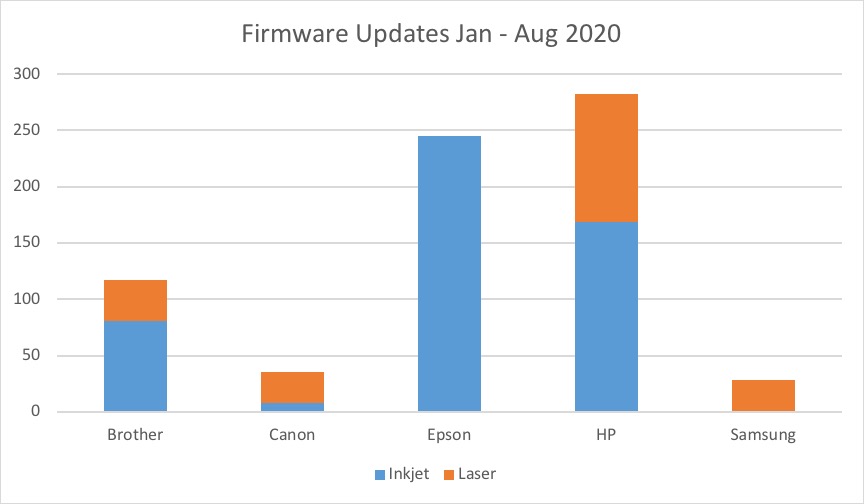 According to Apex Microelectronics, their dedicated firmware team detected thirty-eight firmware updates that blocked the use of aftermarket products, out of a total of 707 firmware updates detected between January and August this year.  The team, based in Zhuhai, check out  OEM’s websites, new printers and new cartridges looking for updates. Apex commented, “It is not possible to cover the whole channel, but we are confident that we have 90% of the data accuracy.”

While the majority of firmware upgrades are designed to fix bugs and optimise performance, 38 did bock aftermarket products with a slew of upgrades coming as the COVID-19 lockdown began rolling out.

In March HP issued a firmware update affecting HP 903xl and 953xl cartridges in the United Kingdom market. Richard Pateman of UK based World of Inks Ltd reported at the time that customers are experiencing problems when installing remanufactured cartridges and the cartridges will not work again until new chips are available.

Around the same time, Lexmark was reported to have issued a firmware update preventing third-party supplies from working in its MS/MX310 and MS317 series printers. Previously working chips are no longer being recognised and are reporting the error code 32.16 or 32.50.

Hot on the heels of Lexmark, Ricoh issued a firmware update 2.27.1 that affected all Ricoh IM C series machines (C2000, 2500, 3000, 3500, 4500 AND 6000) and MP C models like the MP C2503 and C2504.  The Ricoh firmware update is in line with the ‘Always Current Technology’ strategy launched by the brand in 2019. Where Ricoh has programmed its new firmware to run the update fully automatically without requiring prior authorisation from the user.

Sharp also issued their own firmware update 04.02.72 for printers used with MX60 series cartridges in April 2020, causing some errors with replacement chips which are no longer recognised by printers such as MX-2651, MX-3071, etc. The printer prompts an “Install the toner cartridge” error message.

No internet connection, not a problem as HP now updates firmware direct from the chip resident on the cartridge.

In May 2020 HP released the newly W2080A/118A series cartridges, which are capable of upgrading the corresponding printers without being connected to a network. This upgrade is contained in the encrypted chip resident on the toner cartridge. Once the cartridge is installed in the printer, the “handshake” between the printer and the cartridge is made and determines the firmware status of the printer and that activates the upgrade if it is needed and no internet connection required.

It is expected that the newly manufactured HP MFP 179fnw printers have installed the upgraded OEM cartridge, which also enables a firmware upgrade to the printer as soon as you start to use it.

Apart from the cost, expense and inconvenience to the aftermarket, consumers are out of pocket and upset.

“DAMN HP FIRMWARE” Tina from the USA said in an email to The Recycler over the Easter holiday. Just one of several consumers reaching out about HP’s latest firmware update. Tina does not pull any punches and goes on “I was just victimised by the latest HP attempt to stop use of remanufactured ink cartridges in my HP Officejet Pro 6968!!!!!  I am steaming mad and will NEVER buy anything HP again!

“How could a company think they can tell me – who brought and own my printer, what kind of ink I must use? Ford doesn’t tell owners of their cars what brand of tires or gas they must use!!!!!!!!!!!!

“With the problems we are facing in the world right now and SO MANY people having to work from home this latest strike at their customers could not have come at a worse time. Blood suckers…..they should be heavily fined for doing what they already know is illegal AND for price gouging at a time when many companies are going out of business due to the virus and yet most that can are volunteering to do things to help….but not HP.”

Meanwhile, instant ink comes in for criticism from UK based Alli, who contacted us saying: “This scam and that is all it is. Cost me over £70 ($87 / €80) I didn’t realise that I was charged monthly. I didn’t use my printer for around 8 months as I was out of the country. I have only just been able to cancel the log in site is as clear as mud on how to cancel. I googled and found out that way, I also found a way to talk to one of the rogues that harped on about two missed payment when I stopped the card. I have received 3 black and two colour of which 1 colour and 1 black [cartridges] are unused, and now cannot be used because of their chip protection.

“I bought a set of two cartridges from Amazon for £17.90 ($22.50 / €20.50). you really were doing me a favour HP. I have had such a bad time over this, I have used HP for 35 years, my current pc screen K/Board and mouse plus printer all HP. I’m upgrading this month and its all going I cannot bare to look at another HP product that’s the damage, this must be doing, I am not alone in this. The charity shop will get some current new kit, I will make sure to tell them a post note on the printer saying whatever you do, do not sign up for the scam that is INSTANT INK. Good riddance.”

Editor’s Opinion: The pace of firmware updates continues, and the OEMs are raking in the cash, but the consumers are waking up to the tactics and it is a gamble for the OEMs in how far they push consumers. You don’t need a lot of Tina’s to voice their opinions and devalue their brand value and the consumer loses a fair choice.