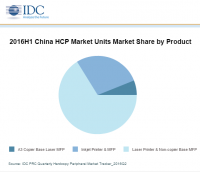 Market analysts IDC have stated that the deal will “trigger changes” for the country’s printing industry.

The OEMs agreed on the deal last week, with HP Inc acquiring Samsung’s printing business for $1.05 billion (€932.8 million). The Recycler had previously reported Samsung was mulling over a $1.8 billion (€1.6 billion) sale to HP Inc, after the Seoul Economic Daily outlined Samsung was “considering selling its printer business” as it “shifts focus to its core businesses”. More details were revealed by both OEMs after the announcement as well.

IDC have looked into the deal’s implications, and stated that the acquisition will “trigger changes in China’s printing market”, adding that HP Inc’s “entry into the A3 copier base” and laser MFP market will “bring major changes” in China in the “product upgrade and business model transformation arenas”. The OEM’s new A3 copier products launch “reflects its upbeat outlook of the relatively high profit margin of the market”, and its “greater expectations of the printing solutions and printing management services market”.

With the acquisition and the copier launch, HP Inc will – the analyst predicted – “improve its existing technologies, expand its product portfolios and speed up business model transformation”, with these moves also helping “facilitate the product line-up upgrade and sales model transformation in China’s printing market”.

Citing its quarterly analysis of the Chinese hardcopy peripherals (HCP) sector, IDC noted that A3 copier base laser MFPs made up six percent of overall shipments during the first half of the year, while sales revenue “accounted for 34 percent of the market”, showing that “A3 digital composite machines had a substantially higher average price than desktop printers”. In turn, the machines “generally have a bigger printing volume than desktop printers”, meaning “larger potential profits from follow-up consumables and services”.

Its entry into the copier sector will also “break the monopoly” of Japanese OEMs including Fuji Xerox, Canon and Ricoh “who control the core technologies” and will “suffer from the change”. These OEMs will “be forced to increase investment in R&D and product upgrades”, as well as “attach greater importance” to monochrome mid to high-speed and colour devices. In colour, three of HP Inc’s new products will be A3 colour page-wide copiers, with “more advantages” over competing devices.

The sector thus will see “fiercer competition […] in the future”, and an acceleration of colour replacing monochrome, with IDC speculating HP Inc will “attach more importance“ to MPS, which is “still at a nascent stage” in China. More contracted businesses will replace transactional businesses, with Fuji Xerox having “clear advantages” in MPS as HP Inc tries to expand “by enlisting more third-party partners”.

In turn, HP Inc is expected to turn MPS into “compact modules and packages”, encouraging more “third-party agents” to adopt an MPS model and expand the Chinese market. Finally, Samsung’s 6,500 patents were said by IDC to be the “biggest asset” the OEM has acquired, because it will be able to “amass more comprehensive” IP rights and “make up for its lack […] in the past”.

Donna Wang, Research Manager at IDC China, commented: “The acquisition will allow HP to build on its own strength in printing solutions and leverage Samsung’s leading position in the smart office sector to expand its printing management service business. To a certain extent, HP’s focus on these two areas will trigger major changes in China’s printing market.”