The OEM’s new machines include PageWide, OfficeJet and LaserJet devices, alongside a new MPS offering. 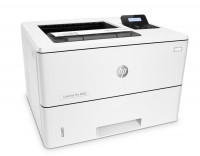 In a press release, the OEM launched over 15 printers that are “driving the printing category forward”, including a new brand of PageWide devices alongside new OfficeJet Pro machines and LaserJet printers. The PageWide brand extends to A3 MFPs for the first time in an attempt to “redefine the copier market”, while a new line-up of A4 machines will be released under the brand next year.

HP Inc claimed they will “provide professional colour, best-in-class cost of ownership, fastest speeds, best energy efficiency, and the world’s most advanced security and management features in its class”. The first range is the PageWide Enterprise Colour series, consisting of the 556 and MFP 586 for SMBs, with a print speed of up to 75ppm, with both expected in May for respective prices of $749 (€683) and $1,999 (€1,823). Another is the PageWide Pro 500 series, consisting of 552dw and MFP 577dw, with speeds of up to 70ppm, and both will be available in April from $699 (€637).

Under the LaserJet range, the first release is the Pro M501 series of monochrome printers, available from April at $549 (€500), as well as the Colour LaserJet Pro MFP M377 colour MFP, again available from April for $489 (€446). The OEM has also upgraded its MPS programme, with HP Secure MPS focusing on the security of devices and technology, while its JetAdvantage security software has also been updated for machines.

Enrique Lores, President of Imaging and Printing at HP Inc, commented: “We’re reinventing printing for every business — large or small. Traditionally vendors have spoken about ‘Good, Better, Best’ where most customers have to compromise, but today we are promising ‘Best, Best, Best’ allowing our customers to determine the right print solution for their business, not their budget.”