HP has been awarded with two refill patents, 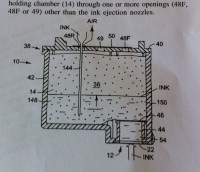 The second patent, EP 2 091 743 B 1 (pictured) pertains to a method of introducing ink into an ink cartridge, utilising ink ejection nozzles and an ink holding chamber.

HP and Canon have both recently been awarded refill patents. HP was granted a patent pertaining to an ink tank, notable as it allows the OEM to be able to prevent refilling and remanufacturing of a cartridge if it utilises said ink tank, while Canon was also allocated a patent related to cartridge recycling.

Samsung has also recently applied for a number of anti-remanufacturing patents aimed at detecting the number of times a cartridge has been refilled or remanufactured and a sensor to detect device manipulation.