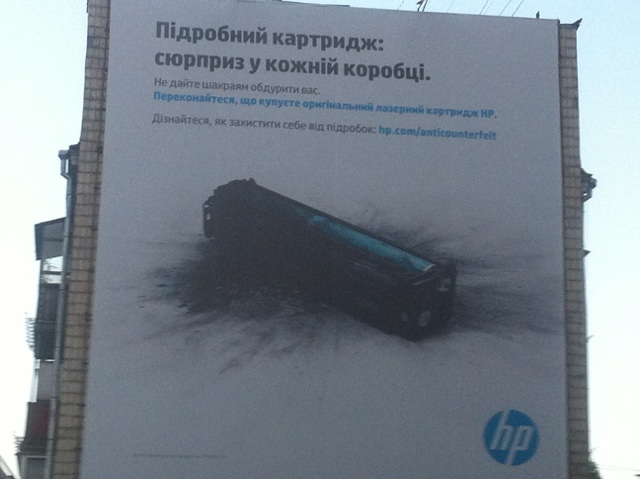 Warning against use of fake cartridges boldly advertised by HP in Ukraine capital.

HP has taken another step in its fight against counterfeit products with the installation of billboards warning customers to ensure that they only buy original HP cartridges.

Matthias H-Henze, who works as a freelancer and Sales Manager for Italeco / Printchip in German-speaking countries and Eastern Europe, as well as providing a special account service for Triton, noticed the billboard in Kiev, Ukraine and reported it to The Recycler, explaining that it was the “first and only time I saw this in Ukraine”.

When translated, the advertisement reads: “Fake cartridge: surprise in every box. Do not let the swindlers cheat you. Make sure you are buying the original HP laser cartridge. Learn how to protect yourselves from fakes.” It also includes a web address for the OEM’s anti-counterfeiting website.

The OEM has also been making efforts to communicate with its customers about using non-original products, explaining the differences between original, cloned and remanufactured cartridges and developing a mobile authentication tool to help them identify non-genuine HP products.

One response to “HP anti-counterfeiting billboard spotted in Kiev”