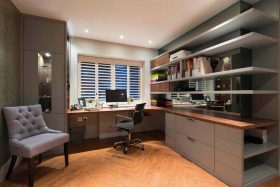 Over the last four decades, printing at home has burgeoned from a rare occurrence to a common aspect of everyday life: this is how the evolution happened.

As the Dunlap Post reveals, “there are a variety of scenarios in which home printing technology is a godsend in our modern day and age”. However, “as recently as 30 years ago”, printing at home was almost unheard of, and was viewed as a luxury.

While the history of commercial printing is widely known, the history of home printing is more obscure knowledge, with its beginnings lying back in the 1930s, when an American physicist, attorney and inventor named Chester Carlson invented electrophotography.

This was a “six-step process” which consisted of “exposing photoconductive materials of opposite electrical charges to one another in order to create images when the material was exposed to light.”
Herein lay the origins of later laser printing, although the first high-speed laser printer would not come into being until 1976.

The 70’s also witnessed the birth of both inkjet and dot matrix printing; however, the cost of these technologies was so prohibitive that for the first ten years of their evolution, only businesses could afford to use them.

As a result, it was only in the late 1980’s that “liquid inkjet printers found a market as a home consumer item”, though again, their cost was prohibitive. Finally, in the 90’s, home printing began to become “more common”, though the resolution of home printers was “quite low”.

The devices used during the 80’s and 90’s were much more “cumbersome” than 21st century models, but as “liquid inkjet technology and laser printers continued to advance”, they became “smaller, faster, more manageable, and, as a result, more marketable.”

Fast forward two decades, and it is “rare” that you enter a home without spying a printer. Current models are sleek and high-powered compared to their predecessors, and offer a range of previously unimagined functions, such as easily refillable ink bottles, and the option to use wireless printing. However, while we may take such devices for granted now, it is “worth taking the time to appreciate just how far printing tech has come in fewer than 40 years”.