Happy birthday to the copier! 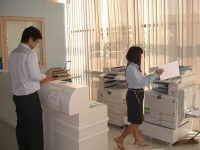 The humble copier came into existence 80 years ago today.

As NPR reports, the genesis of what went on to become the photocopier was a slow one, with the product not reaching the market for another 21 years, with the release of the Xerox 914, the OEM’s first ever commercial model – which was reportedly “the size of about two washing machines, and prone to spontaneous combustion.” Yet it struck a chord.

“There was a distinct need for simple copying like this, and it just took off,” says Xerox’s historical archivist Ray Brewer. “We sold thousands of these machines, and the demand was such that we were manufacturing them in large quantities.”

Amongst the rich history of the machine since, it was reportedly put to use in more covert fashion, with some models having miniature cameras installed for the purpose of espionage on other countries – it was the height of the Cold War, after all!

On the domestic scene, the copier was proving a revolution, with historian Lynn peril describing them as “fabulously liberating.”

“Oh my God, you didn’t have to work with all the lousy carbon paper,” Peril explained. “You could just take it and put it on this glass surface and press a button and you’ve got as many copies as you wanted.” She further elaborated that the root of the machine’s success lay in saving time for office workers, without replacing them, or making their position in the workplace obsolete.

As a secretary in an old Xerox advert once put it: “I make perfect copies of whatever my boss needs by just turning a knob and pushing a button. Anything he can see I can copy in black and white on ordinary paper. I can make seven copies a minute. … Sometimes my boss asks me which is the original, and sometimes, I don’t know.”