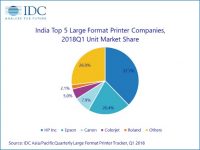 A new report published by the IDC has shown substantial growth in the Large Format Printer market in India.

The LFP market expanded by 11.7 percent in the first quarter of 2018, quarter-on-quarter, and by an even greater margin of 38.5 percent, year-on-year, according to the report.

The IDC Asia/Pacific Quarterly Large Format Printer Tracker 2018Q1 reports that shipments of the large format machines hit 2,954 in Q1 of this year.

In the large format CAD/Technical printer segment, there was also substantial growth in shipments, by 17.7 percent quarter-on-quarter, and 55.2 percent year-on-year. According to IDC, HP remains the market leader, followed by fellow OEMs Canon and Epson.

Meanwhile, in the Graphics segment, shipments increased by 7.6 percent quarter-on-quarter, and 28.3 percent year-on-year, still a significant amount of growth. Epson was named as the overall market leader, with HP following behind; Colorjet was declared the market leader amongst local vendors, as it was in the UV segment, followed by Astrojet and Monotech, and by Monotech and Fujifilm, in the Graphics and UV segments respectively.

Pankaj Chawla, Research Manager at IDC, said: “With the growing environmental concerns, new media and increasing applications graphics market in India is moving towards environment friendly products even if they are priced high. This quarter witnessed more installation of UV and other high end LFPs as compare to previous quarters.”