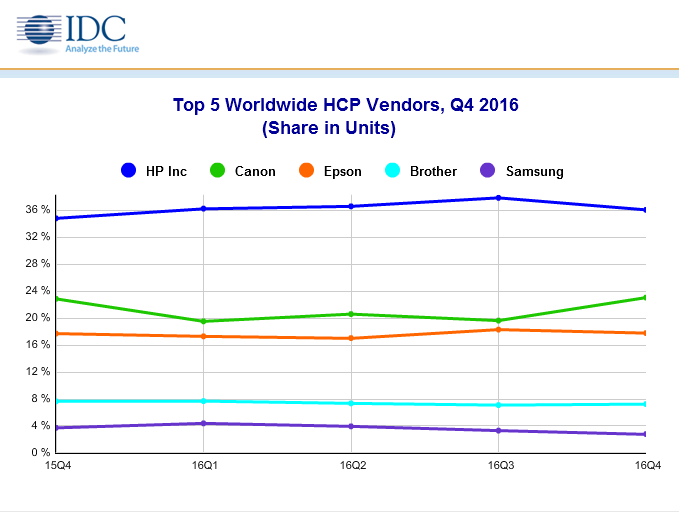 In turn, shipment value increased to over $14 billion (€13.2 billion) in the quarter, while the top three OEMs saw “year-over-year shipment growth” in the quarter as well. HP Inc saw 4.3 percent growth and 10 million units shipped, alongside “year-over-year expansion” in inkjet and laser “driven by channel expansion and continued demand” for its “top selling inkjet and laser models”.

In second and third were Canon with 1.4 percent and Epson with 1.1 percent, while Brother and Samsung (in fourth and fifth) saw declines in the quarter of 4.9 percent and 25.2 percent respectively. Epson’s growth was said to have “continued to ride on the popularity” of the L series ink tanks in the Asia Pacific excluding Japan (APeJ), with four new models launched to “help with its dominance” in that segment and accounting for over 80 percent of its total inkjet shipments.

Other “notable highlights” from the study included that six regional markets saw “year-over-year increases in unit shipments”, with APeJ seeing “the best year-over-year performance” with 4.2 percent growth, and China was said to be “continuing to be the key growth propeller”. In China, inkjet growth was “fuelled by continuous upsurge” in demand for ink tanks in the SMB segment, while laser growth “was powered by channel expansion” by OEMs.