Recent market data for the global hardcopy peripherals (HCP) market saw a 10.6 percent yearly decline, though MPS growth has continued across the world. 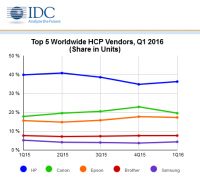 The results, from IDC’s Worldwide Quarterly Hardcopy Peripherals Tracker, highlighted the 10.6 percent year-over-year fall in shipments to 23.11 million units shipped in the first quarter of this year, with inkjet seeing a decline of 11.1 percent and laser a fall of 10.5 percent. However, overall the MPS “contractual trend continues to grow”, with over 1.8 million units shipped for MPS in the first quarter alone.

Additionally, all four “major geographic regions”, consisting of the Asia/Pacific, Japan, Western Europe and the USA, “contributed to the positive contractual momentum”, with growth ranging from 3.9 percent to 41 percent. One other area of interesting growth was the rise in high-end colour laser machines with speeds of over 45ppm, which saw a growth of 8.4 percent in the quarter.

In terms of OEMs, Epson continued a “growth streak” from last year, with an increase of 6.7 percent in the quarter “more conservative” than its 19 percent average in 2015. This was said to be due to the Chinese market “pulling down Epson’s growth rate” after it “effectively reached” its targets. HP Inc meanwhile grew its laser business by three percent in North America, for a 39 percent share, while the colour laser segment from 21 to 30ppm grew by 785.5 percent last year.

This huge growth was said to be down to “both printer and MFP shipments mov[ing] upstream”, while the Colour LaserJet M2xx family of machines “is driving demand”, as HP Inc has “found great acceptance of the new JetAdvantage technology”. Globally, HP Inc continues to dominate with 36.3 percent market share and 8.3 million units shipped, though it lost 3.6 percent share year-over-year as well as seeing a decline in shipments of 18.6 percent.

Canon also saw a slight, two percent fall in shipments, but saw growth and remained second in market share terms, with 19.5 percent compared to 17.8 percent last year, and 4.5 million printers shipped. Third was Epson, with a 0.9 percent decline in unit shipments but a growth in market share from 15.6 to 17.3 percent, and four million units shipped.

Brother holds fourth place with the same 7.7 percent market share, though it saw a 10.6 percent fall in shipments, while Samsung is fifth with a diminished share of 4.4 percent compared to last year’s 5.2 percent. The OEM also saw a fall of 24.7 percent in shipment terms, while other OEMs held 14.8 percent of the market between them – a one percent increase from last year, despite a decline in shipments of four percent in that time.