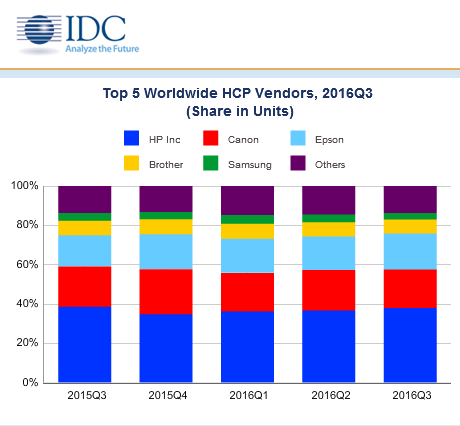 The results from IDC’s Worldwide Quarterly Hardcopy Peripherals Tracker found that the global printer market “continued its decline in the third quarter despite growth in [the] Asia-Pacific”, with shipments down three percent to 25 million units. The analysts added however that “the modest improvement over the previous quarter”, which had seen a 3.8 percent decline, was “largely due” to “solid results” in the Asia-Pacific excluding Japan, which grew 4.4 percent year-over-year.

Other areas of note included that the contractual segment grew 6.1 percent in the quarter compared to last year, “driven mainly by the managed print services (MPS) trend”, while business inkjet shipments declined 7.1 year-over-year to 2.4 million units, with inkjet MFPs “accounting for 90 percent of these shipments”.

IDC also reflected on the Western European market, where laser markets grew 1.9 percent year-over-year in “sharp contrast with the negative trend observed in the region for the past five quarters”. Additionally, the market saw laser revenue grow “more than volume”, which indicates “prices in many Western European markets are holding steady”, with average selling prices (ASPs) for laser increasing by 1.2 percent in the quarter.

The analysts reported last month that its latest quarterly analysis of the Western European market found “mixed performances” across the board, though shipments of laser printers “made gains”. On an OEM basis, Epson was “the only vendor among the top five” with positive unit growth year-over-year, with this “driven by strong performances” in the Asia-Pacific excluding Japan, Western Europe and the USA.

HP Inc continued to hold the most market share of all the OEMs, with 37.9 percent share of the market, which was a fall of 0.7 percent year-over-year, while units shipped fell from 9.9 million last year to 9.4 million this year. Canon remained in second place but also saw its share fall from 20.5 percent last year to 19.6 percent this year, with units falling from 5.2 million last year to 4.9 million.

Epson remained in third place as well but saw its market share increase from 15.8 percent to 18.3 percent, and its units shipped also grew to 4.5 million from four million. In fourth place was Brother, where it was last year, with a fall of 0.3 percent in share from 7.4 percent to seven percent and a fall in units from 1.8 million to 1.7 million. Finally, Samsung remained fifth and grew market share 0.1 percent from 13.7 percent to 13.8 percent, with units falling from 3.5 million to 3.4 million.