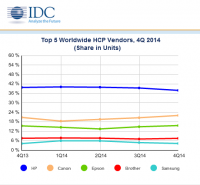 The latest data from IDC saw shipment value increase 1.7 percent in the fourth quarter of 2014, though unit shipments did decline in the same period by 2.6 percent.

IDC’s findings from its Worldwide Quarterly Hardcopy Peripherals Tracker, saw worldwide hardcopy peripherals (HCP) shipment value grow by 1.7 percent to $15.2 billion (€13.3 billion) in the fourth quarter of 2014, while unit shipments fell by 2.6 percent compared to the fourth quarter in 2013, to 30.8 million units shipped. This follows the results in December 2014, which saw shipments value grow.

Laser markets were said to have seen “positive” yearly shipment value growth of 0.8 percent for the whole year, with 10.6 million units shipped, while growth areas included “notable increases in colour laser”, though monochrome laser contracted “as the move to colour products continues”. Inkjet still “makes up the majority of the market”, but laser has seen the best growth, with two million colour laser units shipped for a growth of eight percent in the quarter.

Finally, A3 and A4 printers’ “battle” in mid-speed segments continue, with A4 MFPs seeing growth in 31 to 69ppm mono machine with 78.3 percent share of the A3 and A4 mono MFP market, while 12.7 percent growth in this segment driven by strong results in A4 31 to 44ppm (with 4.3 percent growth) and A4 45 to 69ppm MFP (with 63 percent growth) thanks to Lexmark, Xerox and Samsung machines.

Regionally-speaking, the Asia/Pacific (excluding Japan) or APeJ, region was the largest in terms of shipment value with a 1.7 percent increase in the quarter, and IDC noted that the main drivers of this growth were “the introduction of new models and channel expansions for a few major vendors”, with shipments growing by 1.8 percent. Canon saw most growth of the OEMs, specifically in the USA, Canada, Japan and Western Europe, while HP saw increases in Canada and Western Europe.

“This worldwide trend is due to activity in both Western Europe and Japan, where colour laser has dominated laser value shipments for some time.”