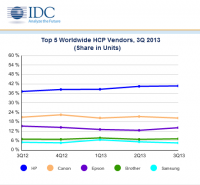 A summary of the 3Q2013 results, reported by IDC, shows that the HCP market saw 28.1 million units shipped – a year-on-year growth of 2.6 percent. The quarter marks the first time since 1Q2011 that both the inkjet and laser segments achieved year-over-year unit shipment growth, with inkjet shipments increasing 0.4 percent and laser shipments undergoing a 5.9 percent increase.

All major markets saw positive year-over-year results, led by the Asia/Pacific market which grew 5.2 percent. This was followed by Western Europe and the US, which both grew 3.5 percent and 0.5 percent respectively.

16.8 million units were shipped worldwide in the inkjet segment – the biggest hardcopy technology market, with the growth in shipments attributed to the four percent year-on-year increase of inkjet MFPs. Furthermore, six out of eight regional markets experienced growth in this segment for the first time since 1Q2011.

In terms of the laser market, monochrome laser devices grew 5.5 percent to 8.3 million units, taking a 39 percent share in the overall HCP market, with five out of eight regional markets seeing growth in this segment, particularly Latin America which grew 16.4 percent.

Colour laser shipments meanwhile grew 7.8 percent during the quarter with 1.8 million units shipped, retaining a seven percent share of the overall HCP market. All regions saw growth in this segment, with the Middle East and Africa (MEA) region experiencing the biggest growth at 28.2 percent; followed by Central and Eastern Europe (CET) with 16.1 percent and Asia Pacific excluding Japan (APeJ) with 14.3 percent.

HP was the quarter’s leading vendor, taking a 40.7 percent share of the market and growing 12.2 percent to ship more than 11.4 million units. The OEM also achieved positive year-on-year growth in all eight regional markets, with Western Europe producing the strongest results at 20.5 percent growth.

With a 20.4 percent market share, Canon was the number two ranked vendor, with results remaining “essentially unchanged” from a year ago. Two of Canon’s three largest regional markets saw positive year-on-year growth, namely Western Europe which grew 12.6 percent and the US which grew 2.2 percent.

Epson, Brother and Samsung all made it into the top five, with Epson seeing a year-on-year decline in unit shipments of 4.5 percent but growth in the APeJ market; Brother experiencing a growth of 5.7 percent at two million units shipped; and Samsung’s 4.6 percent market share remaining more-or-less unchanged from a year ago but the OEM seeing a 5.1 percent decline in shipments.

Commenting on the HCP market results, Phuong Hang, Program Manager, Worldwide Hardcopy Peripheral Tracker at IDC, said: “HP and Brother were the biggest contributors to the year-over-year increase in the worldwide hardcopy peripherals market. HP’s growth in laser technology was driven by its on-going trade-in promotion and its efforts to increase the storefront visibility of the LaserJet Pro P1102/P1102w, HP’s top-selling model. IDC expects the overall market to continue growing in the single digits over the next four quarters.”