The remanufacturer opened GIT East Africa Ltd., which is based in Kenya, with operations commencing in March. 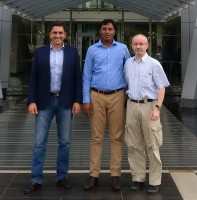 The company’s CEO, Sassan Dieter Khatib-Shahidi, told The Recycler that the decision to expand into East Africa came after the company “was selected [as] an Endeavor company” – one that shows “high-impact entrepreneurship in emerging and growth markets” – in 2015, and one part of this was that an “advisory board of directors” and a “leading capital advisory company in the UAE” helped GIT with a “regional five year expansion plan”.

This plan includes commencing “operations in six countries with exports of our products to a further eight countries”, repeating the remanufacturer’s B2B business model “that has proven itself successful in the UAE and made us the market leader since 2007”. Khatib-Shahidi noted in turn that “other markets will be served with our new exclusive trade brand, Lion”, which has “already been exported to 12 countries in the region, all in about five months since inception. It has proven a huge success”.

The Kenyan office “is our first direct foreign presence”, he added, and will be a “fully-owned subsidiary of GIT catering to the B2B market in Kenya with our known GT Premium brand”. Further expansion is set to include a “presence in at least one more market in the Middle East within the first half of 2016”, and “further markets will be rolled out in accordance with a time plan primarily in Africa”.

The subsidiary will see seven staff members “commence [sales] in Nairobi and then roll out to two further major cities in Kenya”, and promote the Lion brand “in several East African countries from its home base”. Kenya’s advantages, Khatib-Shahidi added, include its population of over 40 million and its position as “the hub of the East African community”, as well as being “one of the most vibrant and open African economies. That being said, it is not easy to penetrate”, with difficulties including safety, corruption and social conditions.

He pointed out however that the “Kenyan toner market is worth nearly $80 million (€) per annum”, so “naturally, we see [a] substantial opportunity”, and “many more markets are neighbouring Kenya, making East Africa a good market”. There is a “high penetration” of counterfeits and new-builds there, but this is one of the “biggest attractions” for GIT because “there is a clear market niche interested in premium remanufactured products.

“This market segment neither wants costly OEM products, nor is it ready to compromise its print flee with poor quality counterfeit or Asian new-build toners. This segment can only successfully and sustainably be reached by an efficient B2B model, a model that GIT has applied and fine-tuned over the past 17 years. Brand recognition is crucial to the success”.

Products to be launched there include the GT Premium brand of remanufactured toners, with a full range of 175 SKUs, but GIT will also provide “HP printers and copiers, maintenance services” and MPS “based on HP infrastructure. Our trade team will offer the range of Lion-branded premium remanufactured toner cartridges to resellers and exporters”.

You can read more about the new subsidiary in a future issue of The Recycler.