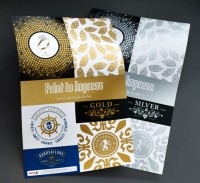 Replacing the Color 1000 device released in August 2010, the Color 1000i Press continues to focus on the high-end professional market, offering print speeds of 100ppm on media up to 350gsm; including dark-coloured media.

The OEM stated that the metallic toners will enable “printers of catalogues, direct mails, flyers, postcards and business cards” to “add marketing effects and improve the value added to each print, such as giving them a high-class look and seasonal sense”. The toners “may also be compatible with other Fuji Xerox printers”; although the article notes that “it is unclear which models could use them”.

The metallic toners have been developed through Fuji Xerox’s Emulsion Aggregation technology, and “form ellipsoid-shaped inks with the flat reflective pigments completely covered by toner particles”. These reflective pigment particles are oriented “in parallel to the print media”, allowing them to “reflect light after the image is fused onto the media”. The pigments “do not allow light to pass through”; allowing metallic printing on a variety of media.

Fuji Xerox highlighted that the process can be completed using a single production printer, which “can improve workflow and help print companies to expand their business through widening printing application with the gold and silver toners”.

Naresh Gulati, Chief Executive of OCA, whose subsidiary Print Bound operates two Color 1000s, expressed interest in using the new toners to enhance marketing materials, commenting: “I would like to run the clear ink on one and gold or silver on the other depending on production needs […] it would be great for getting marketing collateral like direct mail, brochures, and flyers noticed, and unlocks many possibilities for creative design.

“I think it would be best for one-to-one communication rather than posters. Look at what Scodix has done with innovative embellishing, it is something that people are really interested in.”

The Color 1000i Press will be released in Japan on 6 February, and will then be rolled out across the Asia Pacific “soon after”.