According to the local fire service the fire broke out at the ITP premises in Stadium Way, Reading at 07.30 today. Over 50 firefighters from Reading and surrounding areas were deployed to tackle the blaze.

Jason Mccutcheon, who owns the Reading branch of Benchmarx, which is located opposite ITP Ltd, told the local newspaper, The Reading Chronicle: “Around 8 o’clock, we were told by someone about a fire over the road and we saw a bit of smoke and were thinking it was a skip that had caught alight.

“At one point the wind changed direction and came towards us it sounded as though there was a kind of explosion coming from the building, and we didn’t know how much worse it could get. For safety to our employees we have closed the branch for today.”

The ITP premises are located beside the main London to Bristol rail line and at the peak of the fire, trains were being delayed by up to 30 minutes as firefighters tackled the blaze.

The fire brigade remains at the scene as firefighting operations are likely to continue for some time to ensure the fire is fully extinguished. 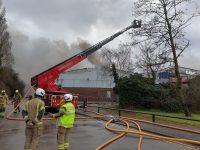 An ITP spokesperson confirmed that there were no casualties, and told The Recycler: “We are all in shock at the moment, the fire happened just before employees were due to start work this morning. The building is severely damaged, as is some of our stock, but our disaster plan kicked in and all operations and communications have been transferred to our Milton Keynes facility.”

ITP was established in 1997 by Michael and Sharon Horlock and grew to be one of the most successful cartridge collection business in the industry. In 2015 the business was sold to Restore Plc and in February 2019 they sold ITP to Ink & Toner Recycling Limited.

ITP’s German facility is unaffected by the fire.