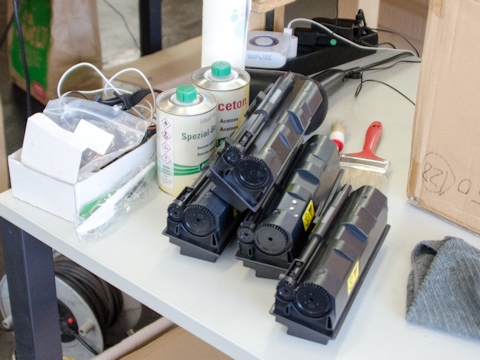 In a raid on 24 July, customs searched 24 residential and business premises in the Rhine-Main and four properties in North Rhine-Westphalia. One of the properties searched was a tax advisory office that undertook the accounting for the gang. Parallel searches were carried out in a company in the Netherlands.

In total 24 persons were found during the raids,  and three suspects were arrested, a 34-year-old from Gross-Umstadt as well as two 48- and 52-year-old men, who do not have permanent residence in Germany.

Allegedly, the gang bought empty Kyocera cartridges and exported them to Dubai and China where they were refilled and then reimported to Germany and sold to trade dealers. As the scale of the operation grew filling was undertaken in Germany in the Hanauer Landstrasse area of Frankfurt.