The annual event reached the penultimate day today, with Messe Frankfurt’s Hall 5.1 still playing host to the best and brightest companies from across the aftermarket industry, alongside thousands of visitors from every corner of the planet.

Alongside the usual exciting atmosphere of trade, collaboration, and partnership, today also saw exhibitors confront and discuss the impending hurdles that 2019 is set to bring; as Paramjit Singh, of Indian Toners and Developers Limited, put it, “challenges are everywhere in this industry.” Among these many challenges, two emerged as the forerunners at the front of many minds, namely the behaviour of the OEMs, following a year of increased pressure in 2018, and – of course – Brexit, and Britain’s scheduled withdrawal from the European Union.

“If there is a Hard Brexit,” said Katun’s Heidi Boller, General Manager for EMEA, “there will be lots and lots of confusion between the UK and the EU, over responsibilities, and who is responsible for what, which could cause a potential gridlock, and impact on the British pound too.” Boller’s colleague, EMEA Marketing Director Cinzia Gandini, described the upcoming changes as “a big question mark.”

“It’s all so up in the air,” agreed ECS’ Operations Director Adam Lighton, although he explained that the company has “lots of contingency plans in place to ensure that whatever happens, our consistent supply to our distributors will continue.”

Such defiance became the theme for the day, with several exhibitors telling The Recycler that despite the ongoing uncertainty of Britain’s protracted exit from the bloc, they remained committed to progressing. Armor’s General Manager, Gerwald Van Der Gijp, opined that although local manufacturers could be impacted, the aftermarket would weather the storm.

“I think there will be more opportunities for us,” he commented, when evaluating the potential state of play after the 29th of March – the current withdrawal date.

Data Direct’s Procurement Director Peter Cowan echoed this positivity, saying that whatever the outcome of the final weeks of negotiations between Britain and Europe, “it will be a whole new world.”

The other pressing issue facing the industry – constant OEM manoeuvring against the smaller companies, on grounds of alleged patent infringement and others – was also discussed in depth today, with Frances Chen, Sales and Marketing Manager of GPI-Cartridge Web, describing recent conduct from Canon, HP, et al, as “very aggressive.”

As with Brexit, however, opinion was split not only on how best to respond to this top-down dominance, and what sort of threat it posed. Peter Cowan identified the OEM’s behaviour as “waving their sword around and trying to put the fear of God into people,” but considered their continual advances in chip technology to present more of a problem.

Ninestar’s Media Specialist Ruby Wei, meanwhile, asserted that the threats of the OEMs were “not worrying, because we always respect the intellectual property of the OEMs. We do not infringe – that is a must for our products.”

Joachim Kretschmer, of PRP Solutions, had another take, believing that events like Canon’s much-publicised crusade of lawsuits helped separate genuinely IP-safe companies from those producing clone cartridges and other infringing products, even going so far as to welcome the litigation.

The OEMs also featured heavily in today’s seminars, which saw ETIRA’s President David Connett guide the audience through the current state of the remanufacturing industry, and the projected developments over the coming years. Examining the recent changes to the markets and the shift in perceptions amongst the wider public, Connett explained that the message for the industry must focus on “reuse, not single use,” and that there was a wind of change approaching the European market in particular: “If the OEMs want to stay in the market long-term, they will need to start thinking about reuse.”

Other seminars on Day Three saw Static Control’s Paul Needham discuss the recent revelations around DecaBDE, and what steps the industry could take to “get its house in order,” and Javier Martinez of Turbon looking at Managed Print Services, contract sales, and the impact these could have on resources, margin, and service. Joachim Kretschmer delivered a presentation on intellectual property, and its importance within the harcopy business, while Lightwords Director Peter Mayhew returned to the podium also, looking at multifunction printers, apps, and the unexploited potential revenue streams these could provide. 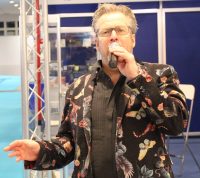 By the end of the day, all thoughts of hurdles and challenges, big and small, evaporated, as the assembled companies let their collective hair down. Numerous exhibitors hosted parties and gatherings at their respective booths, with Armor entertaining many colleagues, guests and visitors with live music and dancing.

Tomorrow’s final day of Remanexpo 2019 will see a series of seminars on personal perspectives, including the promise of a unique ‘fireside chat’, where a selection of industry figures will reflect on the past four days, the coming twelve months, and a wide choice of other topics too.

To relive the previous days of this year’s show, check out The Recycler’s coverage of Day One and Day Two, or click here for everything you need to know about Remanexpo and Paperworld.