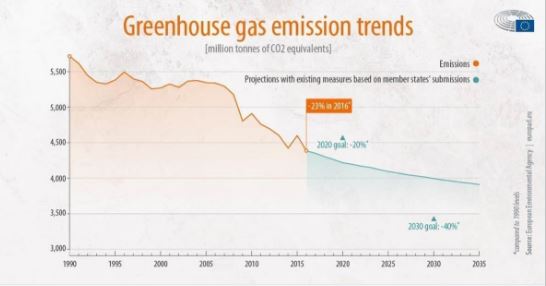 The EU has unveiled the progress it has been making toward cutting greenhouse gas emissions by 2020, using infographics.

Explaining that it has set “ambitious targets” for reducing greenhouse gas emissions, the European Parliament states that “Fighting climate change is a priority for the EU”, and announces its progress using infographics.

The first infographic demonstrates how gas emissions have decreased since 1990 and offers projections for the future, with levels predicted to fall below 4,000 million tonnes of CO2 by 2035.

The Parliament explains that EU targets for 2020 have been set out in the climate and energy package adopted in 2008.

One of its objectives is a 20 percent cut in greenhouse gas emissions compared to 1990 levels.
In 2015, the Parliament reveals that the amount of greenhouse gas emissions in the EU had already decreased by 22 percent compared with 1990 levels.  According to EU countries’ latest projections based on existing measures, the EU says it will remain on track to meet this target. Emissions are expected to be 26 percent lower in 2020 than in 1990.

Early estimates, however, show that greenhouse gas emissions in the EU increased in 2017. Discussions are ongoing on how to tightening the EU’s 2030 targets and its 2050 strategy ahead of COP24 to take place in Katowice, Poland, in December.

To meet the target mentioned above, the EU says it is taking action in several areas.

Between 2005 and 2016, emissions from power plants and factories covered by ETS fell by 26 percent, which the Parliament describes as being “markedly more than the 23 percent reduction set as the 2020 target.”

The second, concluding infographic used by the EU reveals which sectors contribute to greenhouse gas emissions, and then reveals member state targets for 2020, as well as previously recorded levels.