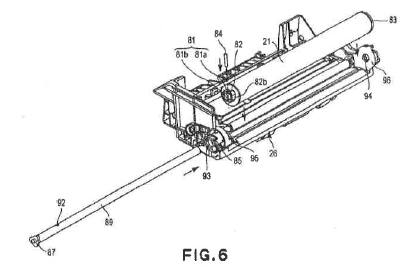 The European trade association is going to look into the granted patent, which it says “seeks to monopolise” remanufacturing techniques.

An image from the patent document

ETIRA stated that patents on remanufacturing methods “are a permanent nuisance for our industry”, adding that “ETIRA does not support them if they render the legitimate activity of remanufacturing cartridges impossible”.

The patent, EP 1 536 297 B1, was granted to the OEM on 8 January this year, and refers to a process cartridge as well as the “mounting method” and “replacing method of a photosensitive drum”, with the document giving detail of the process of replacing the drum – an operation that remanufacturers of toner cartridges undertake and which could affect them with this particular cartridge.

The Recycler reported on the patent’s significance in March earlier this year, and ETIRA noted that the industry has identified it as “a potential risk” with over 180 claims that seek to “monopolise basic techniques that have been used by many remanufacturers for years”.

It then discusses the method of “pulling out the drum shaft”, including the openings in the drum frame and the direction in which it can be turned to be removed or installed. The patent even goes on to cover the input of a replacement drum and its mounting on the drum frame, with each step until completion covered in the document.

The 180 claims in the patent, ETIRA adds, are “yet another example of the ridiculous approach followed by the European Patent Office (EPO) that we have seen in this industry: after 10 years of deliberations, the patent grants a monopoly on technical effects that were around at the time of application or would have easily been thought of by an expert.

“But the EPO is often more interested in collecting registration fees than in promoting innovation or connecting to developments in the real world”. The association noted that its experts would look “in-depth” at the patent to analyse “the implications for the industry”, and you can view the patent in full here.