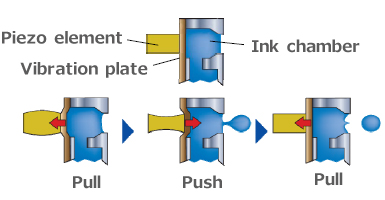 OEM discusses evolution of its Micro Piezo printhead technology 20 years after it was first developed.

Recalling the conditions which led to the development of its Micro Piezo technology in the 1980s, Epson explains that most of its printers in the 1980s were serial impact dot matrix (SIDM). However, the market for these devices declined as the use of personal computers and office laser printers increased, and so the company began to research inkjet and other printing technologies.

Epson states that as its early inkjet printers struggled to make an impact on the market, it began researching a different type of printhead, under the guidance of Minoru Usui, who is the current Global President of the company.

The team recognised that the main issue facing them was the piezo element that was included on the glass printheads used in the early Epson inkjet printers, as they were unable to generate enough power to fire an ink droplet despite applying 100 volts in an attempt to cause the element to change shape, generate mechanical pressure and force ink out. It was for this reason that they decided to improve the piezo in some way.

The new piezo element was able to move the element up to 1 ?m using just 30 volts, compared to the 0.1 ?m achieved using 100 volts with the previous piezo element. This meant that sufficient power could be generated to fire ink straight and accurately, with the low voltage also meaning that the driving circuits could be smaller, allowing smaller printers to be manufactured.

After deciding on the structure of the new print head, the team needed to make it viable for volume production and commercialise an inkjet printer using the new printhead, and therefore formed an emergency project team consisting of staff from various departments within the company and headed by Usui.

The first printer containing the new technology, the Epson Stylus 800 monochrome inkjet printer, was then launched in 1993, with the world’s first 720 dpi printer, the Epson Stylus Color, launched in the following year. The product was a success, despite its high cost of $1,000 (€759), due to its high resolution and print quality.

Epson has recently announced the development of the next-generation printhead for future Epson inkjet printers, created by combining the company’s experience with the latest MEMS manufacturing technologies, with the company planning to utilise the new printhead in business inkjet printers for the office and in industrial printing systems to begin with.

You can read Epson’s full back story in two parts, here and here.