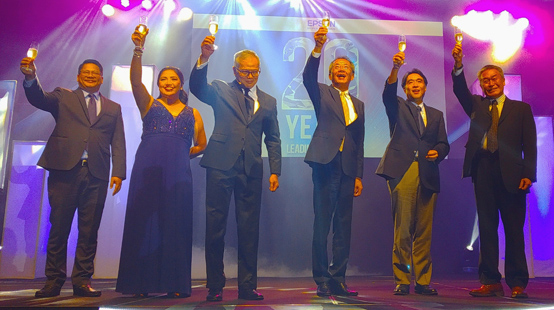 On 20 September 2018, Epson Philippines marked two decades of business in the country with special celebrations at the Grand Hyatt Hotel in Taguig.

As the Manila Standard reports, the theme of the OEM’s 20th birthday celebrations was “20 years leading the show”, and during the event the subsidiary’s Marketing Director, Eduardo Bonoan, made a special celebratory toast.

“We boldly predict a strong 19 percent growth by the end of the fiscal year 2018,” he said during his speech.

This “audacious prediction” is supported by data gathered by IDC, which demonstrates that “Epson is the leading company in the year-over-year shipment growth in Q42017”.

“We started as a modest representative office here in the country. From then on we have grown rapidly due to the hard work and creativity of our dedicated employees.” Managing Director for South East Asia, President and Country Manager Toshimitsu Tanaka said.

During the event at the Grand Hyatt, Epson voiced its appreciation for its long-time employees, honouring them with a special award and recognition ceremony during the birthday celebrations, and proceedings concluded with another laudatory statement from Bonoan:

““As we celebrated 20 years of Epson, let’s start a brand new year, and we’re expecting many, many more years to come. I salute you everyone here.”