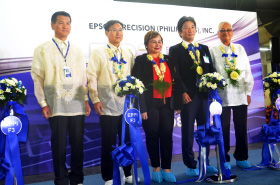 Epson opened its new inkjet printer plant in the Philippines with a ceremony held 25 August.

“We are proud to host in the PEZA zone one of the world’s most-trusted and pioneering manufacturers of office machines including printers and projectors. Epson Precision (Philippines) has vastly contributed to the growth of the economy of this country. The new facility is a testament to Epson’s commitment to continually providing high-quality products and maintaining its leadership in the international electronics industry,” said PEZA Director General Charito Booc Plaza, who attended the ceremony.

Epson President Minoru Usui said, “Epson Precision (Philippines) will play a critical role in Epson’s medium- and long-range business strategy. The company and its new factory will contribute to inkjet innovation and visual innovation, two of the four areas of innovation we are targeting under the Epson 25 Corporate Vision.”