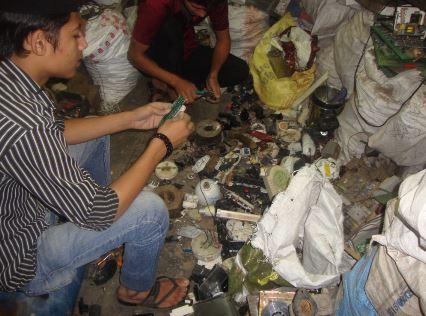 A new study has revealed that e-waste is contaminating Delhi’s soil and groundwater, with the potential to cause health hazards to the city’s population.

As The Hindu Business Line reports, “massive piles of e-waste” in Delhi are contaminating the city’s soil and groundwater, according to a newly published study appearing in Current Science. The study’s findings indicate “that soil and water contamination is likely to find its way into the human body resulting in health hazards.”

Conducted by researchers from Jamia Millia Islamia, the study involved monitoring the soil and groundwater of the Krishna Vihar industrial area, in East Delhi, which turned out to contain “an alarming amount of toxic heavy metals”.

This contamination is due to the number of “unorganised e-waste handling and dumping units” in the area, as well as additional recycling units, which “release their hazardous effluents” such as heavy metals.

Samples were gathered from five different locations, “selected on the basis of e-waste activity around them.” The researchers then collected samples from an additional five areas where there was no such activity. Comparison of the samples revealed “dangerous levels of contamination in both soil and groundwater near unregulated and heavily polluted e-waste dumps.”

“If you don’t manage e-waste in a sustainable way, toxic substances will be released into the environment. Cadmium, chromium, lead and other heavy metals, when exposed to the environment, leach into the groundwater. Very soon it enters the food chain through bio-accumulation and your liver and kidney are affected,” explained Prof.Sirajuddin Ahmed, co-author of the research paper.

In addition to the findings of high levels of heavy metals in the soil where e-waste units are situated, levels of all heavy metals except zinc were also found to be higher than “prescribed limits” in surrounding groundwater.

“When I began the study around 2012-13, live recycling workshops were predominant in the area. The extraction processes of precious metals from e-waste were hazardous. Acid treatment was being carried out for recovery of metals like copper, leaving residues in acid drums. Then these effluents were being directly thrown into the land,” explained Rashmi MakkarPanwar, a member of the research team who also serves as a lecturer at the G. B. Pant Institute of Technology.