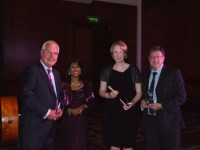 Mark Austen, Managing Director of Office Club commented: “Office Club has had a long standing partnership with Jet Tec which continues to go from strength to strength. This award was presented in recognition of the fact that over the past 12 months our members’ purchases from Jet Tec have increased by the greatest amount out of all of our preferred suppliers – no mean feat when you consider that the starting position 12 months ago was already very healthy; and as a group we have seen direct sales increase with the majority of our suppliers. Congratulations to Jet Tec on this well-deserved award, and we at Office Club look forward to working together to continue that pattern of consistent growth”

Speaking on DCI / Jet Tec’s win, Phil Sneath, Commercial Manager at DCI / Jet Tec commented: “We are thrilled to have been presented with this award. The continuing development and growing reputation of our remanufactured range of toners coupled with the proactiveness of the Office Club group has ensured continued growth in a very difficult market.  I would like to take this opportunity to thank Office Club for their continued support and look forward to celebrating another successful year at the 2013 conference”.