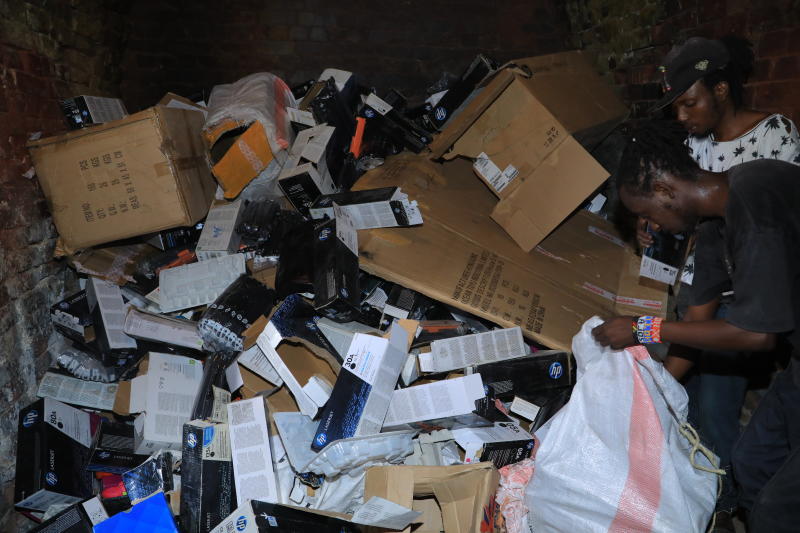 Some of the contraband goods seized in Mombasa destroyed ready for burning at a go-down in Mombasa County on Friday 13th March 2019. Anti-Counterfeit Agency confirmed the goods were worth Sh5 million and were seized from different business people in the County. [Kelvin Karani, Standard]

Standard Digital reported that the Anti-Counterfeit Authority (ACA) destroyed “an assortment” of counterfeit goods confiscated from various businesses in Mombasa. The items were of a value of Sh5 million ($48,161/ €43,730), confirmed the ACA and were burned at the Coast Clay Work in Changamwe.

Ms Flora Mutahi, Chairman of the ACA Board, confirmed the goods were a mix of “footwear, clothing, electronic goods like circuit breakers, cosmetics and stationery, which were replicas of some popular local and international brands.”

Mutahi, speaking to Standard Digital said: ”This is a clear violation of the Anti-Counterfeit Act 2008 law of Kenya.”

Mutahi expressed how ACA is committed and serious about the impounding and destruction of counterfeit goods which enter the country through a number of entry points. Talking to Standard Digital she highlighted that “the series of high profile seizures being carried out by ACA would go a long way in planting the seed of fear and uncertainty in the hearts and minds of counterfeiters.”

Mutahi told Standard Digital: ”We now have a road map to implement through National Action Plan against illicit trade. I will be at the forefront to reinforce our institutional links. We at ACA want to further open up to the private sectors to assist in law enforcement and consumer awareness programmes to cut the demand side of counterfeiting.”

In July, the Uganda Registration Services Bureau (URSB) reportedly destroyed five tonnes of counterfeit toner and cartridges which were seized between January 2019 and June 2019 by the URSB’s Intellectual Property Enforcement Team.