A report from a UK governmental think-tank stated that reuse and remanufacturing “can bring economic benefits to manufacturers”. 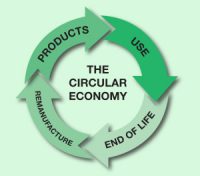 Materials Recycling World reported on the investigation from the Green Alliance, which has stated that “growing markets for second-hand electronics and reused components” can financially benefit manufacturers, because this approach is “the best way of retaining value” in a market where there has been a “dramatic rise in the cost of raw materials”.

The report notes that the circular economy model can “reduce cost and risk” in ways such as “minimising expensive chip fabrication”, with electronic devices up to five years old able to be “recovered profitably by either reselling once-premium models” to emerging markets, or by “disassembling devices for parts”. Additionally, with “collection and repair costs taken into account”, the value of the UK markets for three year old laptops and tablets could be £720 million ($1.1 billion/€972 million) and £90 million ($139 million/€121 million) respectively.

Green Alliance adds that “standardising the size, shape and connectivity of components” would in turn allow for “easy reuse of carbon-intensive elements” like integrated circuits, while device recycling or reuse is “seen as an increasingly attractive proposition for minimising regulatory risk”, because governmental bodies “increasingly transfer the costs of the associated social and environmental impacts to retailers and manufacturers”.

Remanufacturing is also discussed, with the Centre for Remanufacturing and Reuse (CRR) stating in the report that it “is at its most successful when it is most hidden, due to consumer perceptions about the reliability of remanufactured goods”. In terms of smartphones, the global market for used devices is “expected to rise significantly” from 53 million to 257 million between 2013 and 2018, with this used market to contribute to eight percent of new sales by 2018.

The report also looked at the Indian and US markets, and found that cloud services can help “minimise the cost of hardware”, as well as software updates, which can “reduce the environmental impact” of disposal by around 85 percent, while used devices should be “retrieved as early as possible” from consumers. Dustin Benton, author of the report, added that “if companies can make reuse easier, they can boost sales and cut environmental impact”.

It also featured the idea that the North American and British markets are the “only viable” markets (out of the two and India) for “parts harvesting and remanufacture”, though India is “realising these benefits domestically due to hardware standardisation and lower wages”. The Green Alliance reported earlier this year that 205,000 new jobs would be needed in the UK if it wanted to implement a circular economy model.