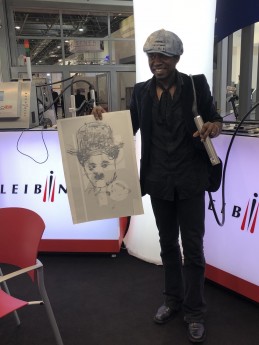 A Cameroonian artist has won acclaim after creating a portrait of the legendary comic actor using an industrial inkjet printhead.

According to Printing Impressions, Francis Nathan Abiamba, who is known in art circles as Afran, was at the Wire and Tube 2018 trade fair in Düsseldorf, Germany, and found himself at a booth next to Leibinger GmbH & Co. KG.

“We started talking and we suddenly had the crazy idea of using a printhead as a brush,” said Christina Leibinger, the company’s Managing Proprietor. “Abiamba just picked up the printhead, threw the umbilical line over his shoulder, and used the back of a fair poster as his canvas.”

Choosing the iconic star of films such as ‘The Great Dictator’ as his subject, Abiamba got to work with the unorthodox brush, soon creating a work that wowed the watching crowd.

“Everyone at the booth was impressed and the magical performance brought many a smile to the audience,” added Leibinger. “The portrait in silver is absolutely stunning and will be given a place of honour at our company headquarters in Tuttlingen.”

The printhead works by shooting as many as 120,000 electrically-charged ink droplets a second through a tiny nozzle, meaning that “Abiamba did not even have to touch the paper while painting.”

The artist himself was born in Bidjap in 1987, and earned a degree in Ceramics at Mbalmayo’s Fine Art Institute, before going on to study contemporary art in Bergamo, Italy, where he still resides. He has a studio in Pescate, northeast of Milan, and his work has been exhibited across Europe and Africa.