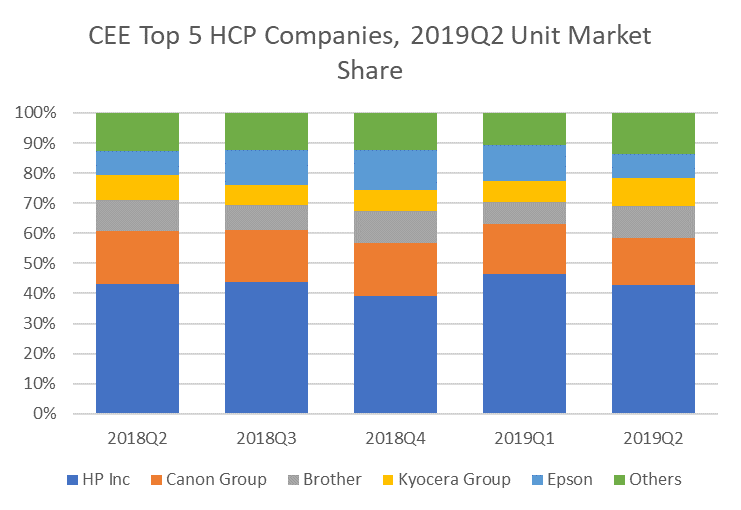 Shipments of hardcopy peripherals (HCP) to Central and Eastern Europe (CEE) rose in value but declined in units year on year in Q2 2019, according to research from International Data Corporation (IDC).

IDC’s Worldwide Quarterly Hardcopy Peripherals Tracker reports that 1.2 million units were shipped in CEE in Q2, a decline of 2.9 percent year-on-year. The shipments were valued at more than $387 million (€347 million), which marked a 2.3 percent year-on-year increase.

The tracker found that inkjet shipments declined 7.6 percent in units but grew 5.5 percent year-on-year in value in Q2. Shipments of ink cartridge devices fell by more than ten percent, while shipments of ink tank printers and multifunction peripherals (MFPs) were flat. The market value increase was driven by significant sales of devices in price bands above $300 (€269).

“As the share of ink tank devices continues to expand, we can expect intensifying competition between vendors in this market area,” says Michal Swiatek, a Research Manager at IDC CEMA.

The tracker indicates that the CEE laser market was flat in unit terms in Q2 but increased 2.1 percent in value year on year. Sales of monochrome lasers, especially cheaper entry-level models, declined, while sales of colour laser devices increased.

Russia remained the largest HCP market in CEE, responsible for 39.9 percent of the units and 35.5 percent of the market’s value. Russia’s economic slowdown contributed to a 9.2 percent year-on-year contraction of the country’s unit share.

Second-ranked Poland held almost 20 percent of the market in both units and value. The Polish market declined 1.2 percent year-on-year in units but grew a robust 18.5 percent in value.

Since the start of 2019, the overall CEE HCP market has fallen 4.7 percent in units but increased 2.0 percent in value year-on-year.