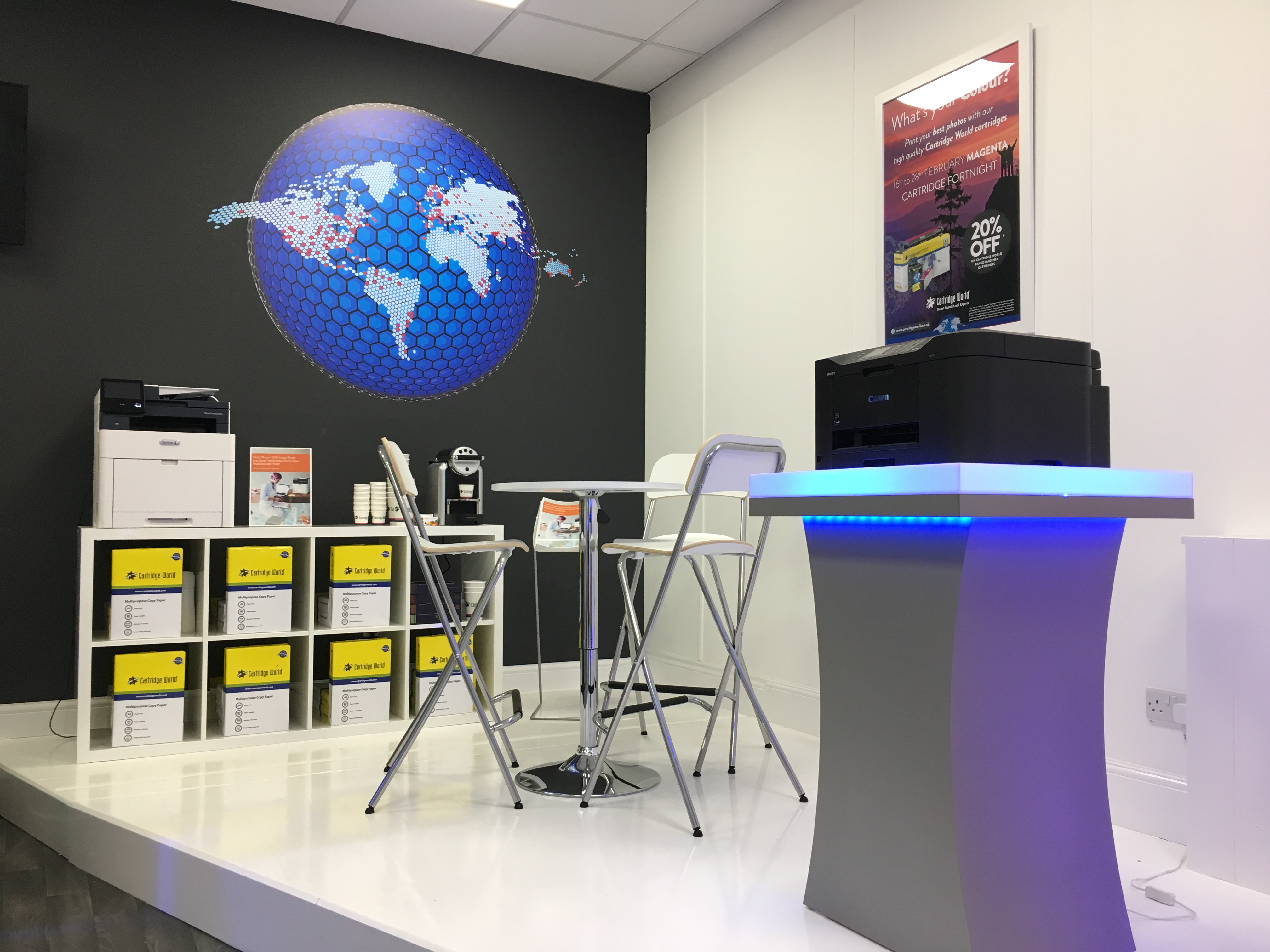 An image of the new showroom store in Harrogate

The UK and Ireland franchise’s CEO Paul Callow was interviewed about the new Harrogate store.

Retail Design World interviewed Callow on the “new store format”, which was revealed earlier this month, and “departs from the traditional Cartridge World environment and showcases new printers and print supplies in a way that enables customers to get hands-on with hardware to ensure it meets their specific needs”.

Callow is said to be “banking on a new strategy and store design to make the brand more relevant after several years of slow decline”, the article noting that “many retailers have found it challenging to cope with changing consumer habits in recent years”, and that “Cartridge World has arguably faced more changes than most”. The first store in the UK was in Harrogate, with 275 branches opened and 10 company-owned, with the remainder franchises.

However, “market dynamics have changed considerably since then”, and Callow “acquired the master franchise rights to the brand in the UK” less than a year ago, noting that “vendors changed their technology, making the cartridges harder to refill. Some reduced their prices too; lots of people started to buy online, and of course the number of people printing at home started to reduce. Fewer people were coming into stores wanting cartridges refilled”.

In turn, “as well as benefitting from cheap digital storage that reduces their need to print, domestic customers are also now used to far more impressive stores than the workshop-type interiors offered by old Cartridge World branches, Callow adding that “the whole expectation of consumers has changed. Cartridge World has been in a steady decline for five or six years”. The company’s “flatlining consumer sales” were however “offset by growing sales” from SMB business customers.

Callow had previously worked for Lexmark, and “identified a clear role for Cartridge World” that involves “building on the growing B2B business that is coming through the company’s stores, providing showroom space for professional products that aren’t given space by mainstream technology retailers”.

His view is that SMBs “print a lot and probably pay too much for it”, and “envisioned a store network that offered meeting and consultation spaces so that staff – and representatives from printing technology brands – could meet with customers to demonstrate products”, adding that “I felt there was good opportunity to create something new out of Cartridge World”.

He presented the vision to franchisees before “searching for an appropriate site” before “finding one next door to the original launch store in Harrogate”, and “designed an interior concept with colleagues rather than using a design agency”, using branding “developed from an identity developed by Cartridge World’s operation in France, combined with a globe icon used for internationally-sourced Cartridge World products, which are manufactured in China”.

The store’s interior features “dark wood floors, a colour scheme taken from the overall brand identity, a screen to show branded content from equipment vendors, and illuminated display pods” as well as “a section of slat wall display”. Both vendors and franchisees “have been supportive”, while new franchisees “who join [to] introduce the new format”, plans “to recruit a dozen new franchisees this year”, and “around half a dozen existing franchisees to upgrade to the new look”.