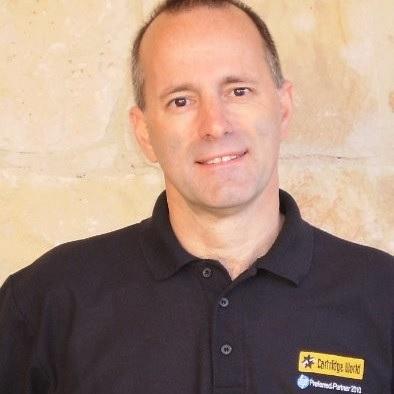 Founded twenty years ago by Duncan Glover, who relocated to Cyprus with his family and set up Cartridge World from scratch. Today, the franchise operates six stores with technicians in every store to promote repairs, starting with free diagnosis, on a no-fix-no-fee basis plus a warranty on our repair work. The franchise has a dedicated online shop with island wide coverage.

According to Duncan Glover the Managing Director of Cartridge World Cyprus: “Our combined efforts saved over half a million printer cartridges from landfill in Cyprus.” From day one, “We put the environment at the heart of our business and for 20 years we have promoted the return of every printer ink and toner we put into the market. We have only ever given away paper bags, never plastic!”

Commenting further, Glover added: “As licensed collectors we are responsible for their future re-use or end-of-life recycling with zero waste, and we promote Open Box and refurbished hardware which aids a circular economy, and we strive to be more efficient still and look forward to more eco-friendly delivery vehicles.”

Celebrating their 20th anniversary this year Cartridge World Cyprus has introduced the bio-based range of toners from Pelikan.

Editor: Congratulations to Duncan and the Cartridge World Cyprus team. Look out for the interview with Duncan in issue 347 of The Recycler, due out at the end of September.