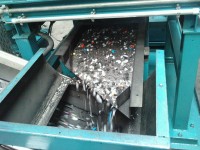 HP Middle East has recently announced collaboration with the Ras Al Khaimah (RAK) E-Government Authority to instigate involvement in the Planet Partners scheme, which has seen more than 389 million print cartridges through the scheme since its inception in 1991.

RAK E-Government Authority supervises the use of thousands of printers throughout various ministries, and is the first government department in the UAE to cooperate with HP Middle East and Planet Partners.

Amin Mortazavi, General Manager, Imaging and Printing Group, HP Middle East, added: “We are very pleased to join hands with the Ras Al Khaimah E-Government Authority to encourage recycling and sustainability in the emirate. Since the HP Planet Partners Program was established, we’ve already recycled over two billion pounds of IT equipment and print cartridges, as part of our constant endeavour to help customers recycle responsibly.”

The Planet Partners scheme was started in the UAE in 2009, and shreds and recycles cartridges collected by HP’s recycling drives.